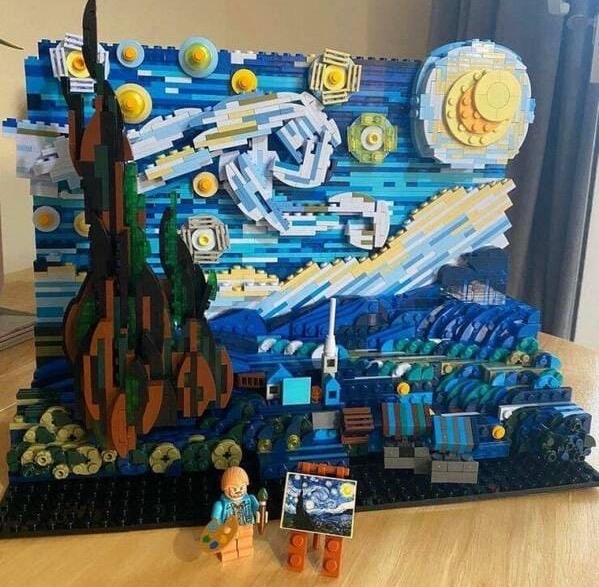 Visily I got to play with Visily this week, on a quick UI redesign, and it’s damn awesome.

It’s a design tool for creating mockups. It’s quite powerful, but also incredibly easy to use for non-designers like myself. You get just enough flexibility and control to communicate your idea, without getting bogged down by Figma-level of precision.

For example, I got to use the built-in library of buttons and input controls. Buttons come with pre-selected variants (filled, outlined, link, etc), pre-set border radius and shadows, and an icon library. So with a few clicks, you can communicate what the final design should look like, without having to be pixel perfect.

All that, but you can also create custom themes, template components, draw anything, etc. There's an object navigator for organizing containers, groups, and screens. Even CSS export for component styles.

And you don't have to start from scratch. Besides a set of templates for common screens, Visily can also convert a paper sketch or screenshot into a mockup. Nice use of AI there. 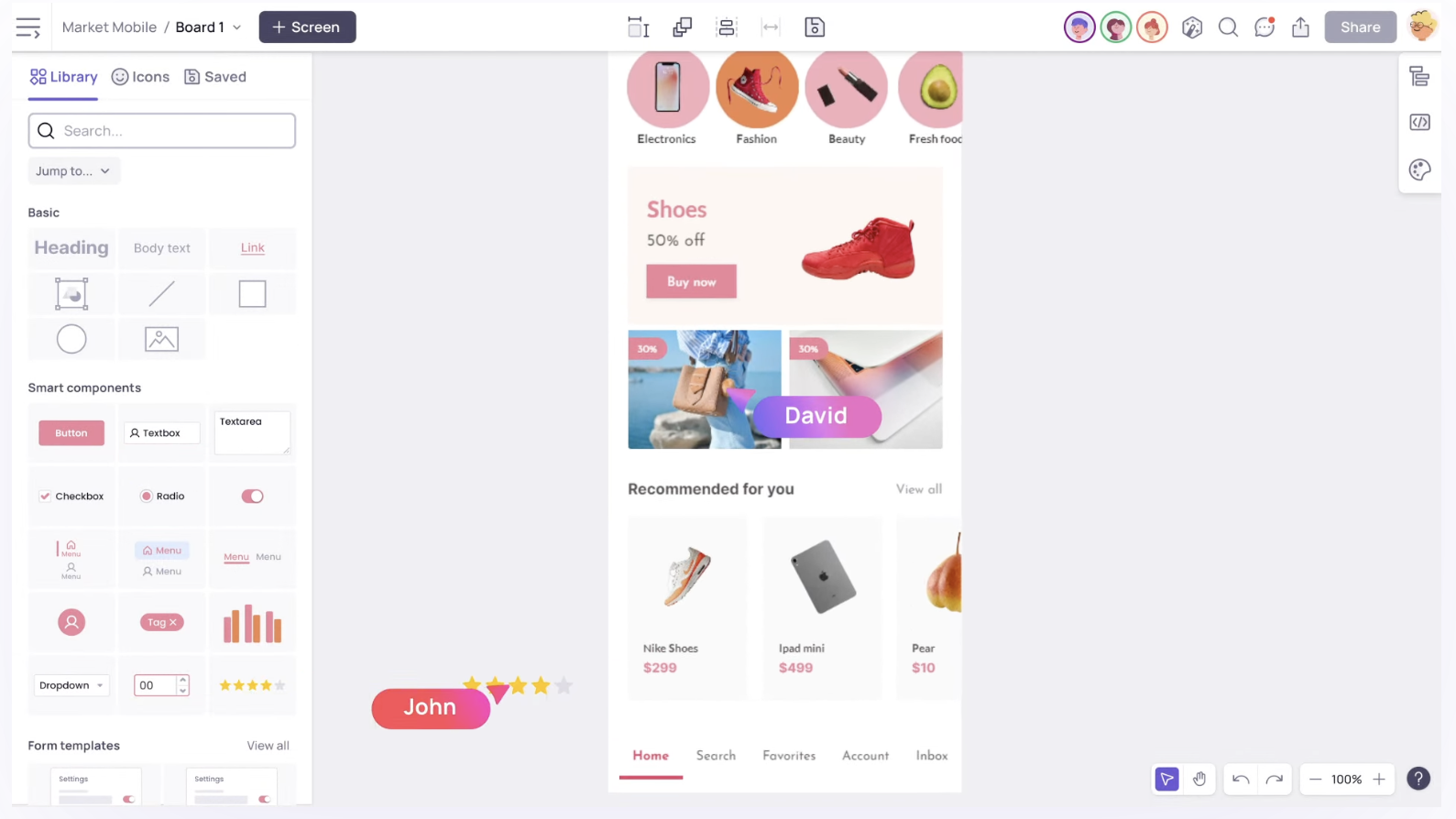 Zaplib post-mortem This has been my experience with many X vs Y comparisons — languages, frameworks, tools, etc. The real world is different from a micro-benchmark, practical gains don't match up with theoretical gains, and don't always justify the switching costs:

Rust is faster than JS in some cases, but those cases are rarer than we expected, and the performance gain is on the order of 2x some of the time, not 10x most of the time. … Without a 10x improvement we can't imagine engineers making the investment to add a whole new experimental tool chain to their stack that their team has to learn and maintain. We wouldn't do it ourselves, and we can't advise anyone else to do it. There are usually simpler ways to find performance improvements than Rust/Wasm.

PostgresML “Train and deploy machine learning models into your Postgres database” Is there anything Postgres can't do?

Then transfer focus to the page & the browser will highlight spell check errors in regular HTML like it would in a text field. 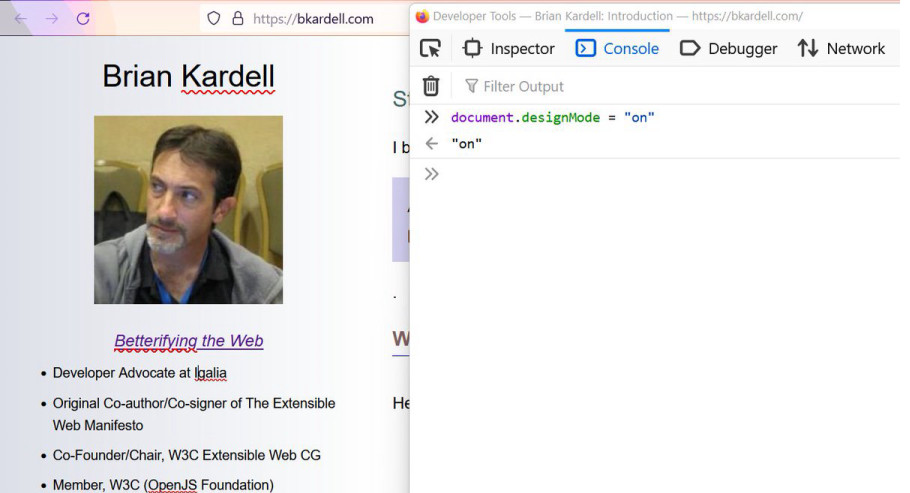 Speex “How cool is this!”

Andyʼs working notes Andy’s website is made of the evergreen notes he writes mostly for himself. He explains why that’s a good idea. I like this UI for reading linked notes, and how they get stacked together. 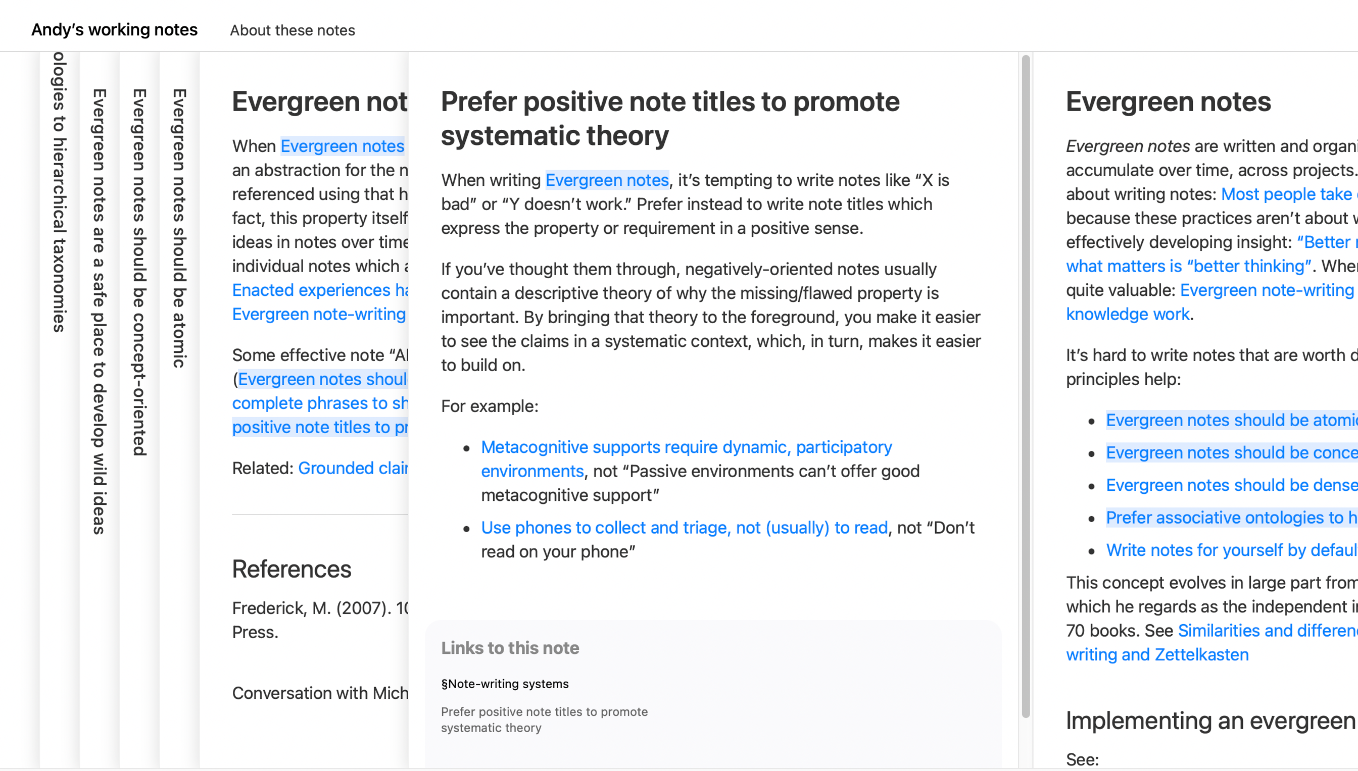 folk Have you used Airtable for managing contacts and relationships? You might just love Folk.

It looks and feels like Airtable. It got the same design aesthetics, a spreadsheet view that feels instantly familiar, Kanban board, etc. Simple UI that works well for a lightweight CRM.

Contact and calendar import (Google only) is solid. I haven’t tried the bulk messaging feature yet.

Folk looks great for small teams, whether you're managing a few deals, recruiting, influencer marketing, or just staying in touch with colleagues. The ease of use of a spreadsheet, but more specialized than Excel. 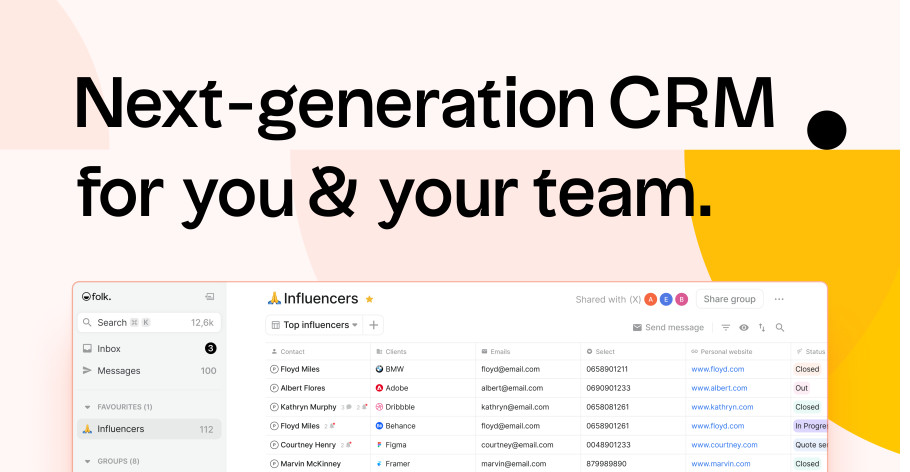 Jack Altman This tweet got popular, I guess it hit a chord:

The most dangerous person to have on a team is the person who is persuasive, confident, vocal, opinionated, charismatic...and who just happens to be wrong a lot.

Why Are American Chips So Boring? Sigh.

As always, it appears commerce is the death of art. Decisions are based on what has already been sold to people already buying, not what could sell to people who didn’t even know they needed king crab with XO sauce chips in their life.

web3 is a beautiful thing. instead of designing & engineering a product, you just make a landing page that takes people’s money and tweet about it.

literally eliminates 99% of the risk of starting up. you’re an idiot if you try to make money on the internet in any other way. 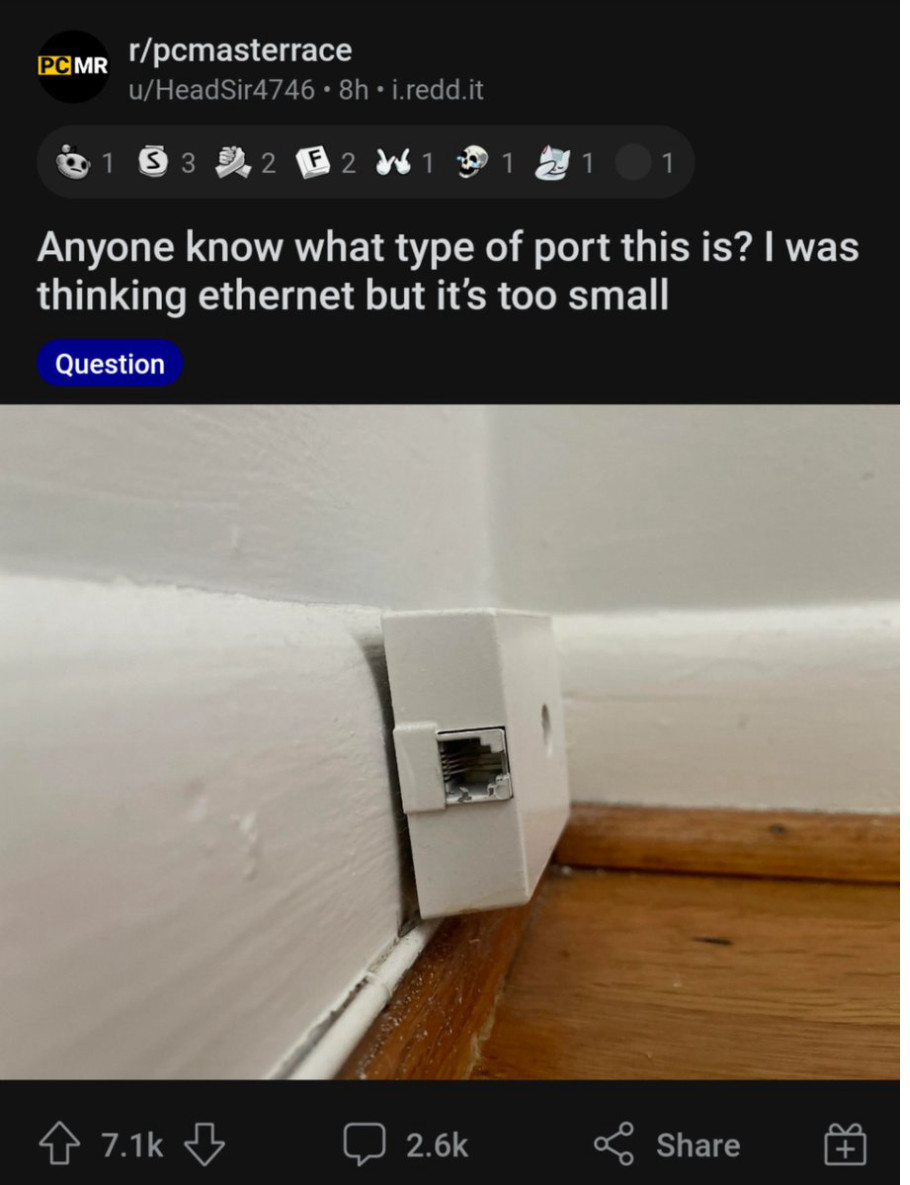 Few days shy of 50 and when I ask my super goth 13-year-old what they're listening to they tell me it's a band I probably don't know called The Cure.

Mechanical Watch An interactive article explaining how mechanical watches work. This is a fantastic way to learn about these delicate mechanisms, and my newfound appreciation for pre-digital technology. It’s remakrable what people crammed into such tiny spaces. 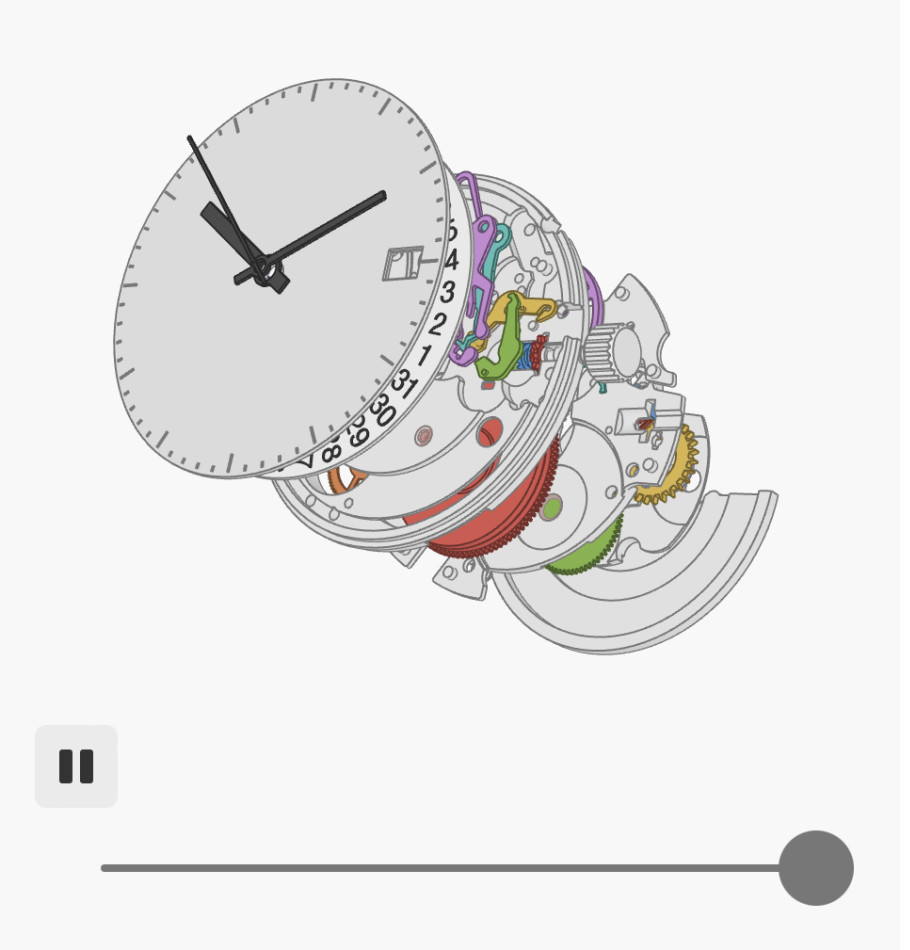 103 Bits of Advice I Wish I Had Known

Today is my birthday. I turn 70. I’ve learned a few things so far that might be helpful to others. For the past few years, I’ve jotted down bits of unsolicited advice each year and much to my surprise I have more to add this year. So here is my birthday gift to you all: 103 bits of wisdom I wish I had known when I was young.

Josh Wolfe I’m halfway through reading this research paper, which is utterly fascinating.

It's a view of our brain based on our experience with deep learning neural networks. When you feed the network similar inputs over and over, as most days are, the network tends to “overfit”. They call that overfitted brain hypothesis.

You want to avoid overfitting, generalization is necessary for survival. According to this hypothesis, dreaming achieves that by using downtime (sleep) to inject random noise. Really interesting stuff and quite readable paper. 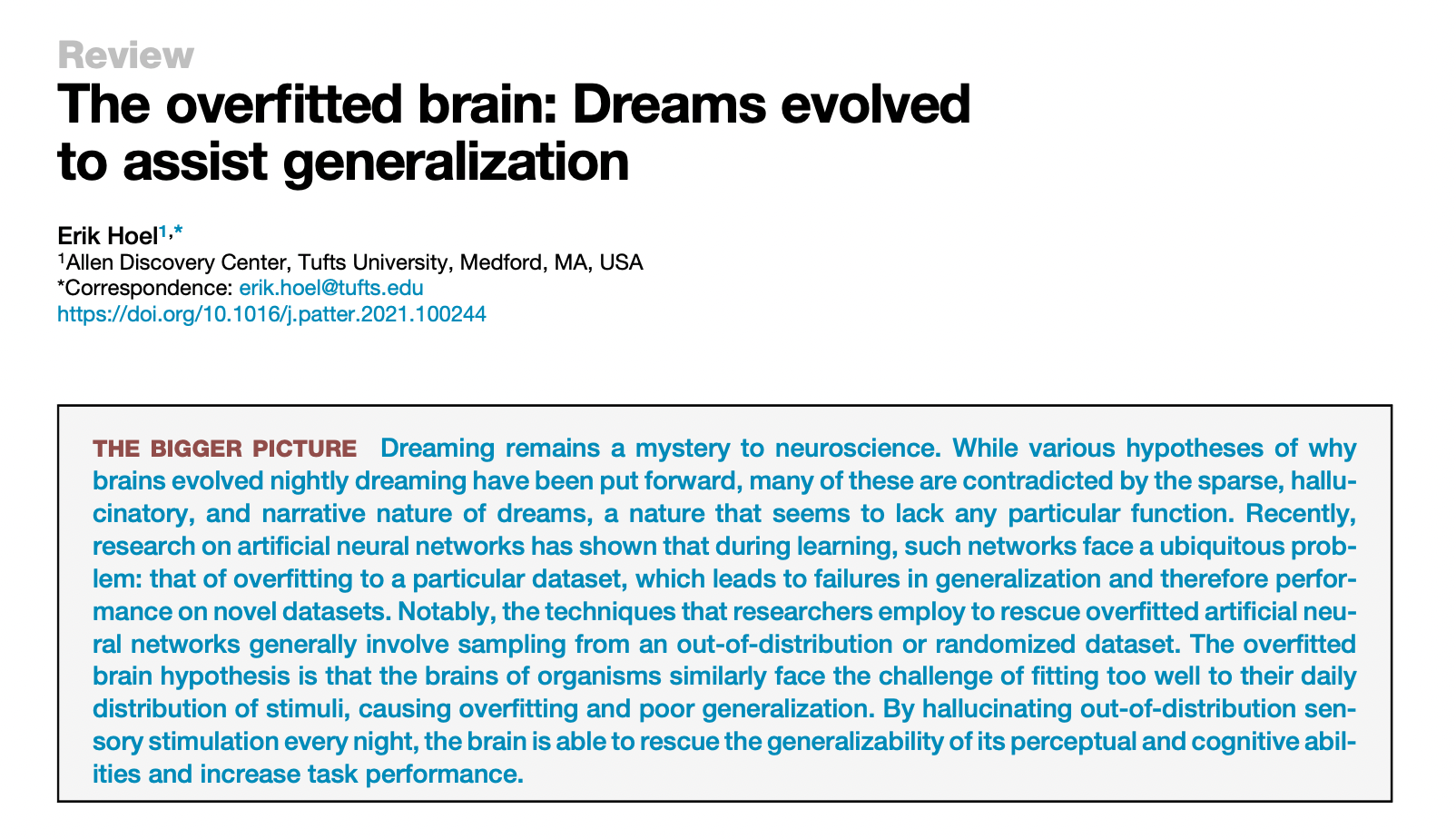 Merzmensch Kosmopol Created with DALL·E 2: "An IT-guy trying to fix hardware of a PC tower is being tangled by the PC cables like Laokoon. Marble, copy after Hellenistic original from ca. 200 BC. Found in the Baths of Trajan, 1506." 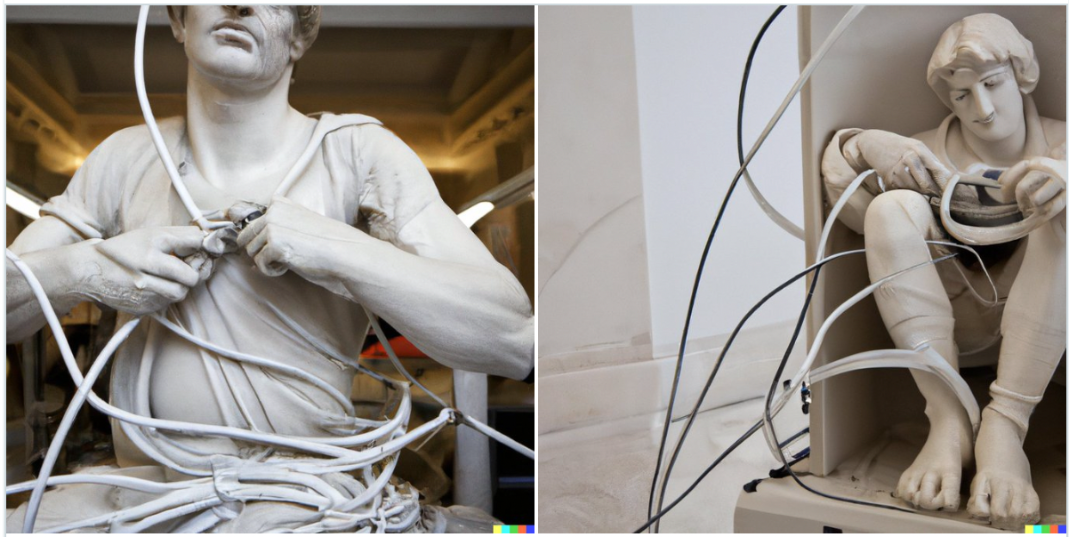