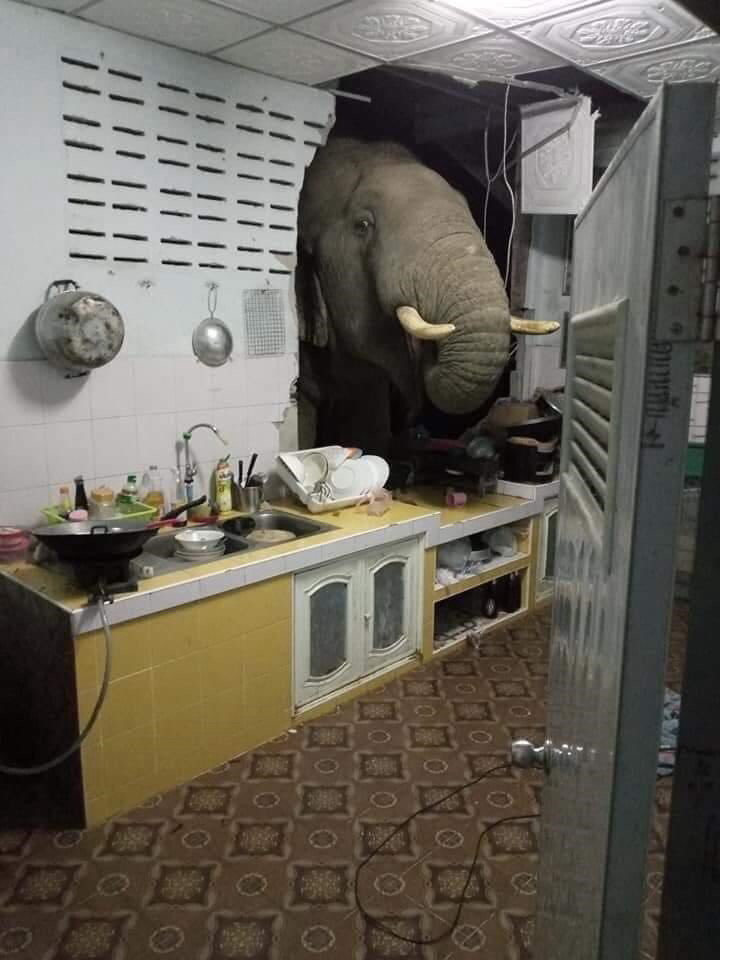 Andrés 'El Pana' Villanueva “Do you have 5 minutes to chat about PostgreSQL?”

Why designers should remove “Hooked” from their reading list This book didn’t age well:

Here is where you start to get the taste that this book is most definitely business-centric. You learn how to make your good indispensable, not how to make the user’s life better. That could be just a consequence, depending on your product, but that’s not really the point. The point is squeezing as much engagement we can from them.

And this didn’t seem too bad 10 years ago. But the world changed, society changed…. Again, I think the metaphor with smoking is on point; people still smoke, but now it’s common knowledge that it’s bad for them.

QueueRun So I accidentally on purpose built a JavaScript framework.

This one is designed for the back-end: HTTP APIs, WebSocket for collaboration, standard and FIFO queues, and schedule jobs (coming).

It’s using AWS Lambda, so you don't have to worry about scaling up/down. But you also don't have to know any CloudFormation or YAML.

I took everything I know to design the best developer experience. And I'm having a blast using it for my own project.

If you like the cutting-edge stuff, check it out and let me know what you think. 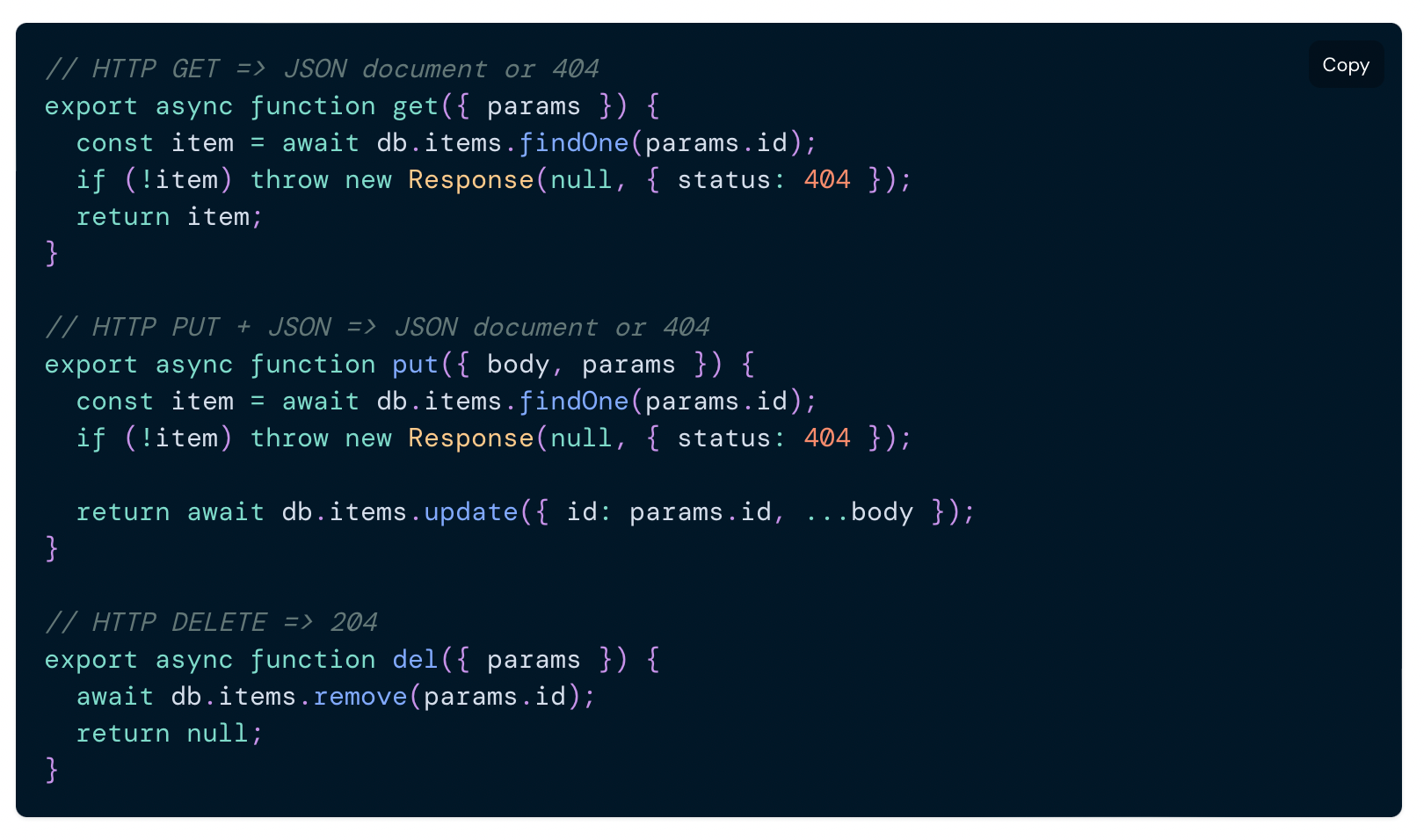 Making the web better. With blocks! This is an interesting initiative. I use a few of these blocked-based apps (Notion, Ghost). What if there was an open standard for building interoperable block components?

These blocks use structured data which makes it easy to move both blocks themselves, and the data within blocks, even if the blocks are in completely separate applications. 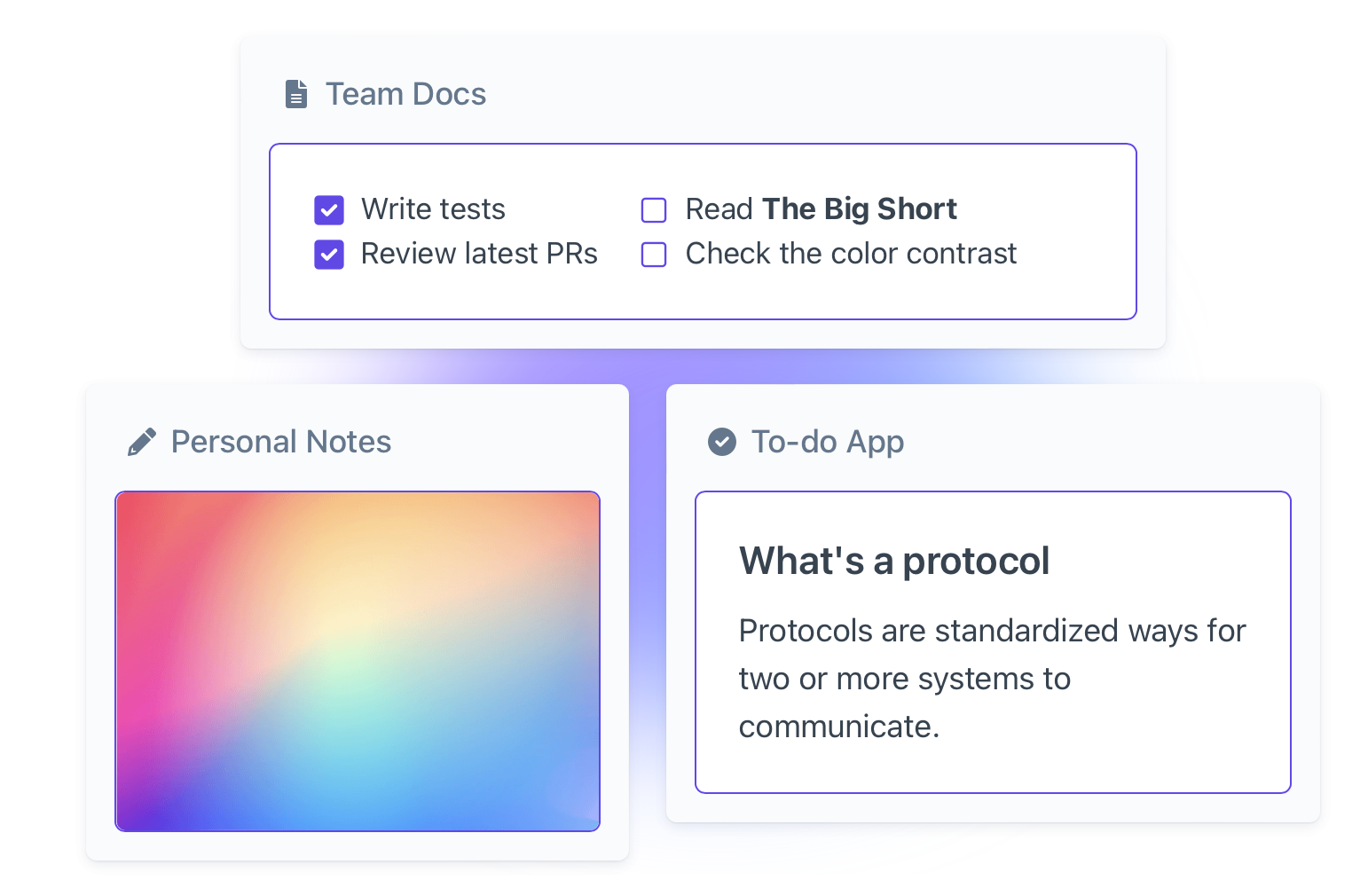 Dynamoose Like Mongoose but for DynamoDB. I'm using the AWS SDK with DynamoDB for QueueRun and its … painful. Although, PartiQL is actually not half bad. Dynamoose lives somewhere between these two extremes, though I do find the API a bit too verbose.

jmaister/excellentexport A lot of apps would be better if you could one-click export to CSV or Excel. This library works in the browser, so you don't need server support. If you can render a table, you can make it downloadable. 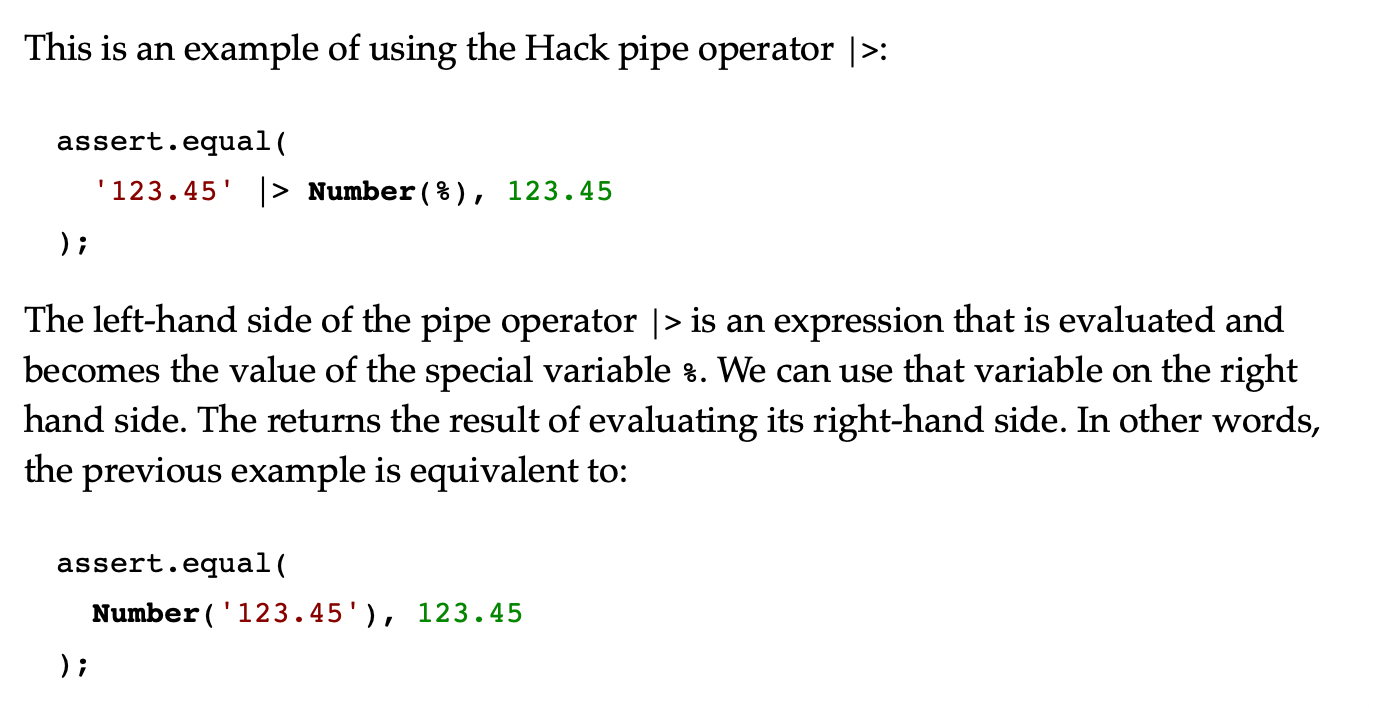 The lead maintainer of Rust-based SWC ("Speedy Web Compiler") @kdy1dev is planning to port the TypeScript type-checker to Go.

An old photo of a very large BBS

You should be noticing the sheer amount of hardware here. I count 16 machines in each group: 8 high, 2 wide. Then, I see at least 4 groups, so this is 64 machines in a little space. I have to assume they are at least 286s (ATs, more or less), but it's impossible to tell from just this picture. They could have been 386s or even 486s by that point, but honestly, the workload just didn't call for it. But, I'm getting ahead of myself! (More on that later...) 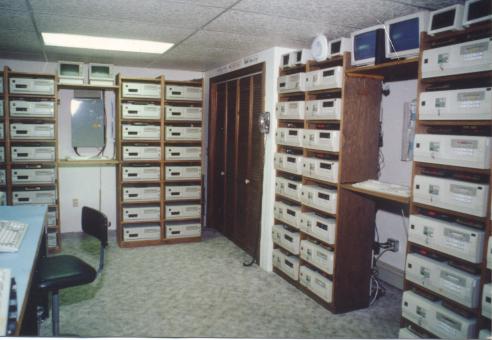 Álvaro Trigo “1 line of CSS to make your problems disappear 👇” 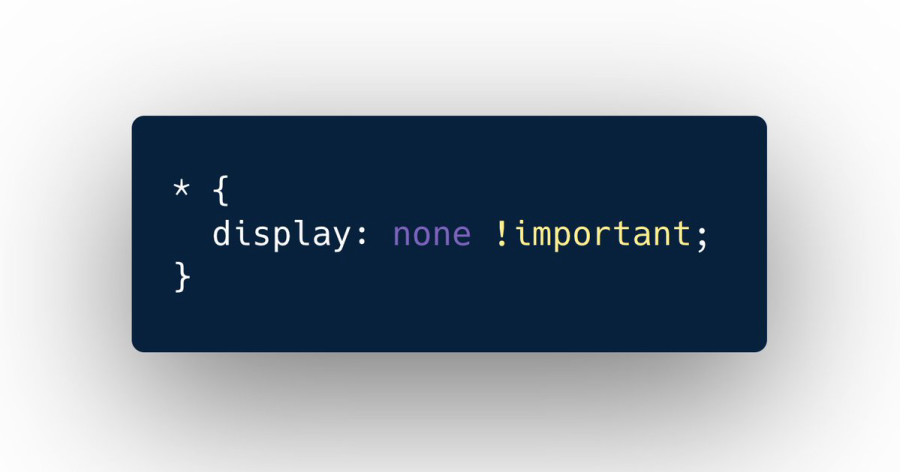 Always encourage engineers to show their work as quickly as possible – an engineer on a project should never go more than a week without showing something, and usually it should be more like a day.

(((TheSteve0))) Documentation is UX but never quite gets the budget or attention it deserves:

I really am curious to hear your thoughts on why you think this happens?

I mean, for most developer products/projects the doc IS the product. If it ain’t doc’ed, it doesn’t exist.

If you say "documentation" three times in front of a mirror, it still won't appear.

underrated skill in computer science is how to break down problems into even bigger problems. how to snowball making a button slightly bigger into a 10 people 1 year project. how to create job security by being the subject expert in a problem you made up in the first place

The most helpful thing I've learned socially as an autistic person is that neurotypical people generally require 3-5 conversational reassurances that you're not going to kill and eat them before you can actually talk about what you need to.

sam lessin The best thing about being cis white male in tech is that the most annoying thing that could happen to you is someone sends you a Calendly link. 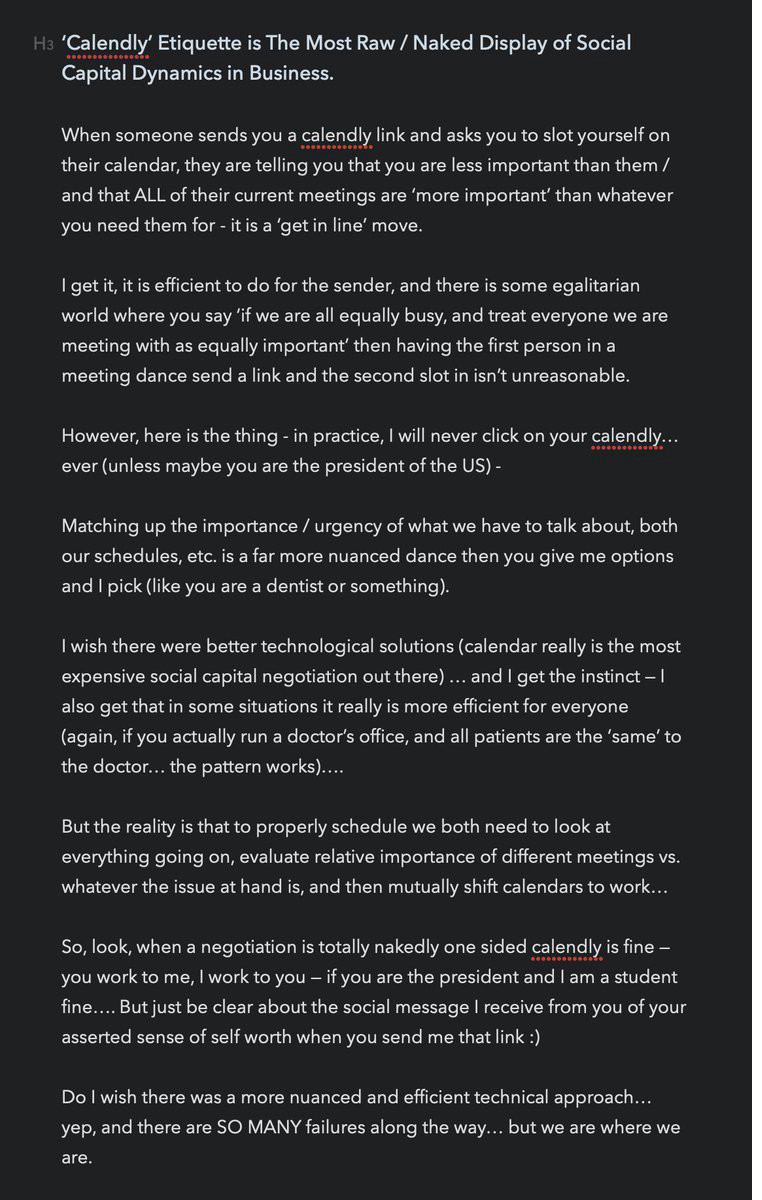 The customers who repeatedly buy doomed products The customer is always right except that some customers that are often not:

In recent years, research has suggested that a certain fraction of consumers are particularly skilled at picking out products that are destined to fail, or get discontinued. 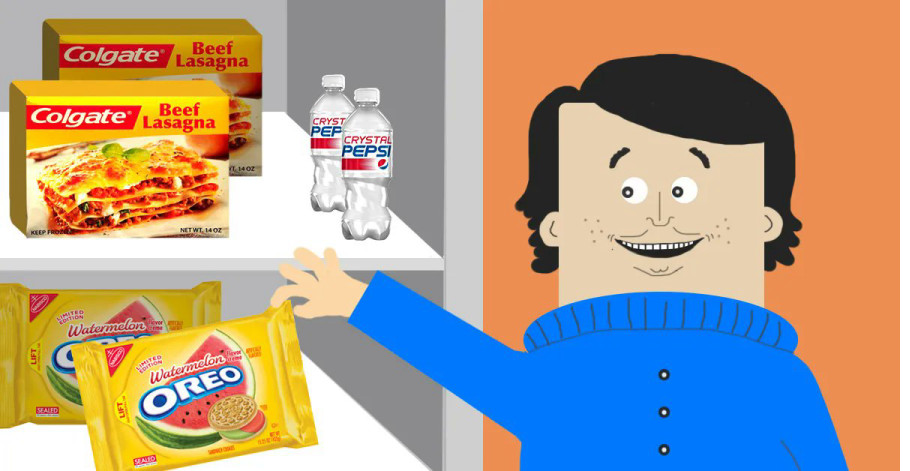 How I got access to 25+ Tesla’s around the world. By accident. And curiosity. I don’t own a Tesla, so this was a fun read about cloud-connected cars. And not pinning this on Tesla. This will happen to every EV manufacturer, which will soon be all of them. Repeatedly, because even if you fix one bug, you then go adding more software features.

“TeslaMate’s default Docker configuration prior version 1.25.1 allows for an attacker to obtain a victim’s generated token, giving them the ability to perform unauthorized actions via Tesla’s API such as controlling certain critical features of the vehicle or disclosing sensitive information.” 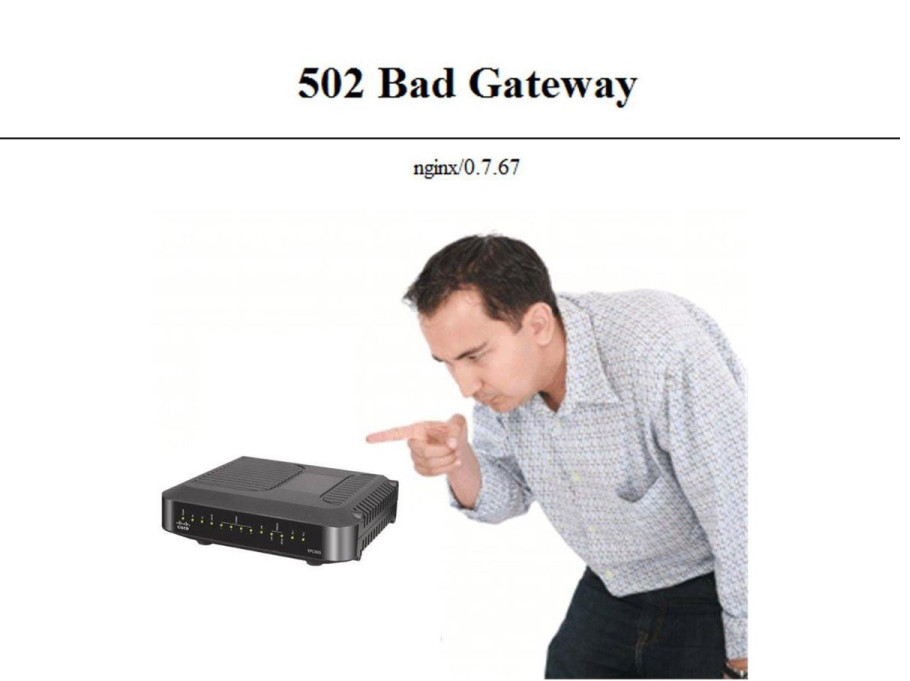 Spotify loses $4 billion in market value after Neil Young controversy First of all, kudos to Neil Young for taking a stand.

When Spotify announced the deal with Joe Rogan, half my timeline was wary of his content and audience. The other half was wondering whether the deal made financial sense given Rogan could monetize the audience outside Spotify's walled garden. 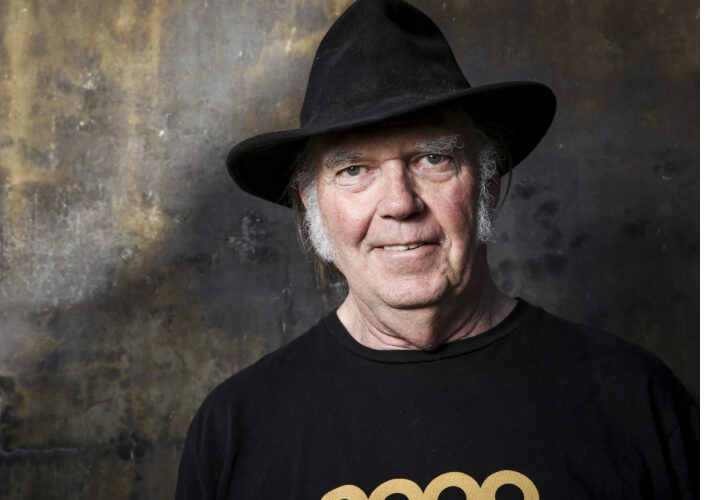 Lulu Cheng Meservey Substack could have sat this one out. Instead this thread which looks like an open call to bad actors to come use their platform, light up some controversy … when your business model is eyeballs …

Boomers Are Sharing Things Millennials And Gen Z Just Can’t Understand (16 Posts) Not a boomer but I do remember life before the cell phone camera:

“In a bar or at a party, you could dance on the table naked and do the craziest stuff. The next morning, you could categorically deny that it ever happened and no one — absolutely no one — could ever show you a video on their phone that it did happen.” —u/rolex42069

Sara Warf “I love this explanation” 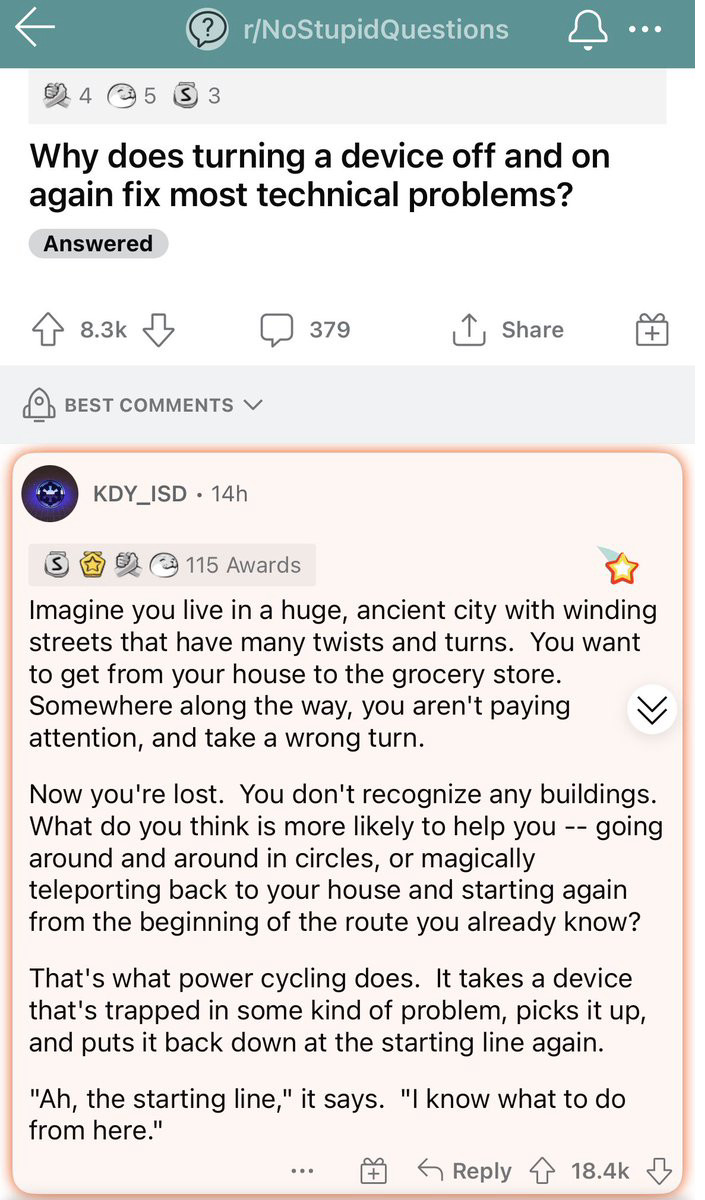 The forgotten medieval habit of 'two sleeps' Good news for people waking in the middle of the night. Apparently, you’re doing sleep right, it's everybody else that suffers from a modern industrialized sleep disorder. I just made that term up.

Caveat, this article is so so euro-centric …

Not Wordle just the speaker list at a tech conference.

Matthew Yglesias: Why do people in the Metaverse not have legs?

Andre Infante: Because the headsets can't track the hips yet, so animating the legs correctly is really hard. I spent two years working on it and was never totally happy with the results. 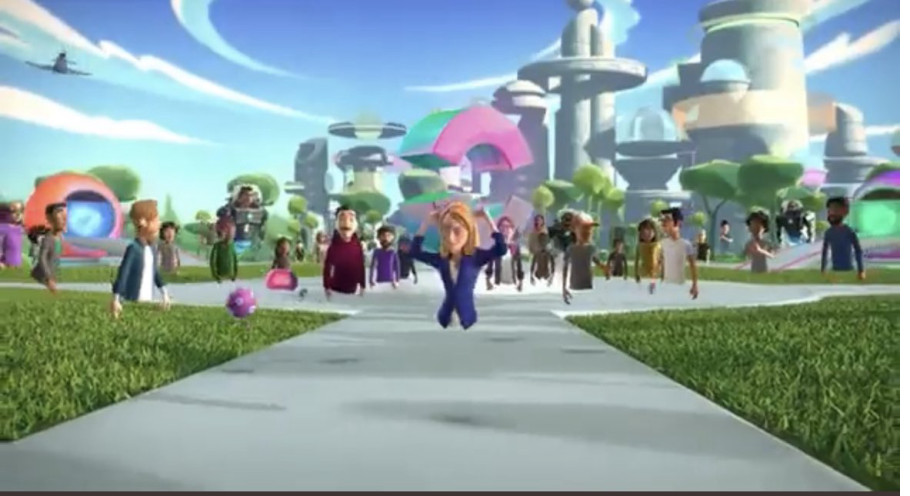 How To Say No Templates for saying “no”.

How to migrate Google For Your Domain to normal Gmail Disappointing.

Google Workspace is $72/year, too steep for a personal plan when all you want is email + calendar on a custom domain.

If you're motivated enough, you can switch over to a free Gmail account. Gmail will send emails from a custom domain, and Cloudflare will receive them for you (free and beta right now):

In September, during Birthday Week, we announced Cloudflare Email Routing. This service allows you to create any number of custom email addresses you want on top of the domains you already have with Cloudflare and automatically forward the incoming traffic to any destination inboxes you wish.

How to Spot a ‘Dark Empath’ … they have "empath" on this Instagram profile?

You may have heard people describe themselves as an “empath” to indicate they’re sensitive, intuitive people deeply aware of the emotions and energy of those around them. These self-proclaimed highly feeling souls are emotional sponges, immediately sensing peoples’ moods, making them natural helpers and healers. But, this excess of empathy is not always used for good. Recently, a new term has emerged in the world of pop psychology: the “dark empath.”

The "couple hours here and there" workweek Sign me up. 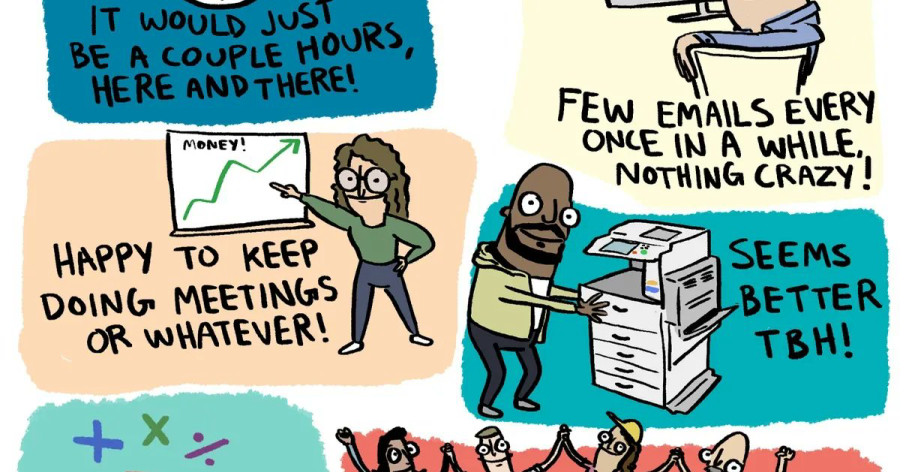