What colour is it? Tells the time in RGB.

Elastic SVG Elements Cool SVG elements that wobble, squish and bounce when you interact with them. Love that this is possible with HTML. Today. Just don't overdo it.

Why does it always seem like the more detail I pour into the design spec, the more the developers fail to execute the vision?

hyper_linda Perfect illustration of the state of front-end development. Just say no! 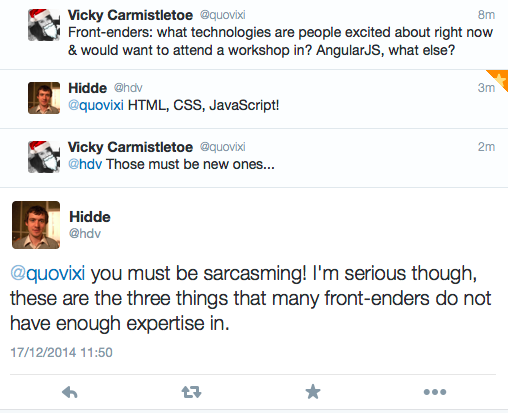 Being a JavaScript developer in 2014 is like speed dating.

45 seconds with each framework before you have to re-write.

philsturgeon Save a lot of pain by following this little tidbit:

"How do you automatically generate a REST API from a database schema?"

You fucking don't. That's how.

ES6 Modules: The End of Civilization As We Know It? All about using ES6 modules in an ES5 world.

Call me old-school but this is just mind-bending:

traceur-source-maps If you're using Traceur for all the latest ES6/7 goodness, this module adds source maps support in Node, so line numbers will start to make sense. You can also use traceur-runner, it transpiles code on the fly with source maps.

Waypoints / Debugging Clever trick. The Waypoints library comes with an additional script that you load in development, that script reports on common user errors in your code:

The debug script will monitor for instances of these common mistakes and provide a console error with a summary of the issue and a link to the detailed explanation on this page.

heuristic: put the least-varying function arguments at the beginning of the parameter list. This makes partial application useful. #fp

William Morgan I worked there before, so yes:

You can measure the health of an org as the frequency by which someone says "that's a really good idea", but it never sees the light of day

hotdogsladies Let that sink in:

I can't think of a single instance where anecdotal evidence was inaccurate.

The Sony Hack I've got three things to say:

Vulnerability announced: update your Git clients The issue affects case insensitive filesystems like HFS+ and NTFS. An opportunity to remind you that whatever code you write should be able to deal with both case sensitive and insensitive file systems.

How We ”Email” Hardware To Space ISS needed a ratcheting socket wrench, so NASA designed one in CAD and emailed it to the space station.

What Happened When Marissa Mayer Tried to Be Steve Jobs Right now Yahoo's share price is based on its Alibaba holdings, as if the rest of the business has no value. This gives Marissa cover for making radical changes, but also for making radical mistakes. The NYT isn't too excited about the future, but are they right, or is their traditional media bias showing?

Driving Safety, in Fits and Starts How technology and government regulation conspired to cause a dramatic decline in deaths from traffic accidents.

A Wave of PR Data A wave of bullshit data is coming our way:

Nobody can say exactly when the trend first started, but in 2014 we saw the first major outbreaks of bogus data distributed by private companies just so it would go viral online.

Burner phone? There's an app for that, and it's earning millions of dollars Burner numbers are a big thing, and not just for drug dealers.