How to do a Product Critique

Watch and learn. That’s all there is to it.

Aaron Hodder "Someone wrote this:"

A documentation crash course for developers Judging by the majority of software projects, documentation is harder than programming, so that's why I link to so many articles about writing better docs, like this one:

It’s a small change, but that switch the reader instead of function is a quick and easy method to make the reader feel more involved in the explanation. We’re not writing fiction in technical documentation, but there’s no harm in telling a story.

Functional Lattice Cryptography (PDF) Perfect example for applying functional programming to cryptography. Right down to the choice of naming:

This work describes the design, implementation, and evaluation of Λ◦λ, a general-purpose software framework for lattice-based cryptography.

I wonder how much Big Emacs paid Apple to get rid of the escape key. They'll stop at nothing in their war on vi.

The worst part about space travel will be the date libraries. You think time zones are bad, have fun with relativity.

Going Faster: Speeding up Software Development Where manufacturing terms are once again applied to the practice of software development:

If the three software project levers above sound to you like DevOps, Lean, and Agile, you are spot on.

The Practical Dev And Medium posts:

I made a venn diagram to describe conference talks 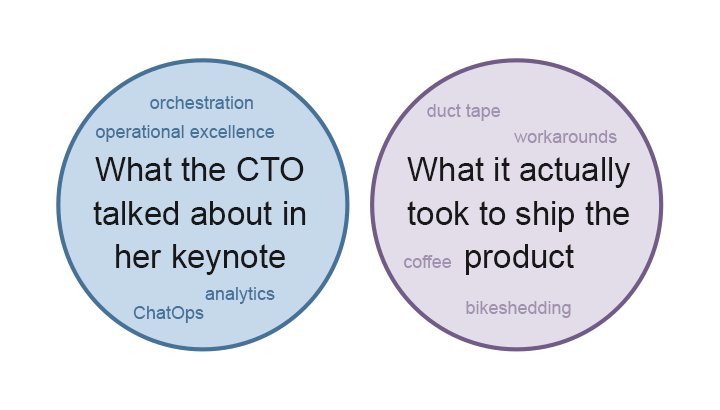 me, glaring at my wi-fi bathroom scale while peeing: "is it you. are you the one hurting all the websites"

how much does a good telescope cost

I do appreciate the new definition of "leaked" emails. Years ago, I "leaked" an iPod after someone broke into my house.

Total Nightmare: USB-C and Thunderbolt 3 On the plus side, we finally got one port to rule them all: data, audio, video and power. Problem is, that's ten different ports that confusingly look the same. I predict this will end up more frustrating than Bluetooth.

"Relax, don't do it" is my mantra. Except replace "relax" with "completely overanalyze the situation & feel defeated by your own thoughts"