Ways To Reduce Content Shifting On Page Load Content shifting on page load is annoying. No one likes it. Here are a few tricks to make sure your web page/app delights rather than annoys.

Pantsuit: The Hillary Clinton UI pattern library The name is spot on.

How do I use QuickCheck to test if a function terminates? Asks StackOverflow: "how do I solve the halting problem?"

Hipku Encode any IP address as a haiku

Trying to make sense of Gmail CSS support From which I learned there is in fact more than one Gmail:

Constant confusion: why I still use JavaScript function statements The avoid the shiny new function syntax, stick to what works.

Babili (babel-minify) TL;DR: Babili can accept ES2015+ input, while current minifiers are mostly limited to ES5, requiring code to be transpiled before minification.

JS MythBusters A bunch more micro-optimizations you can do with JavaScript code running on V8.

The art of writing small and plain functions Read. Practice. Apply. This is not too difficult, and will make your code so much better:

Every function is obvious and straightforward. You don't waste time digging to realize what the code does. That's how the clean code should be.

Testing, for people who hate testing You probably know a few developers who should read this. Starting with this common objection:

If writing tests is hard, that might be a bug

The thing is, tests are just code. If you have a hard time constructing your own objects with some particular state, it might be a sign that your API is hard to use!

400,000 GitHub repositories, 1 billion files, 14 terabytes of code: Spaces or Tabs? The people have spoken, and the spaces have won the popular vote. More valuable learning:

Analyzing each line of 133 GBs of code in 16 seconds? That’s why I love BigQuery.

Specifically, we observe that each of the phases of Paxos may use non-intersecting quorums. Majority quorums are not necessary as intersection is required only across phases. Using this weakening of the requirements made in the original formulation, we propose Flexible Paxos, which generalizes over the Paxos algorithm to provide flexible quorums.

The new hip architecture:
Service workers in the front, serverless app in the back

How to steal any developer's local database One more reason to not store any production data on your local machine. Simple attack against Redis, Memcached, Elasticsearch and other services that support plain text protocols.

I Got Scammed By A Silicon Valley Startup Red flags to look for when joining an early stage startup.

The iBrain is here When it comes to AI and machine learning, Apple does think different:

Apple says it has answers for both. “Some people perceive that we can’t do these things with AI because we don’t have the data,” says Cue. “But we have found ways to get that data we need while still maintaining privacy. That’s the bottom line.”

Livia Labate "TIL after 99 tabs open, the counter on Chrome on Android just laughs at you."

Inside the Federal Bureau Of Way Too Many Guns The one place the US government is not allowing the use of computers. 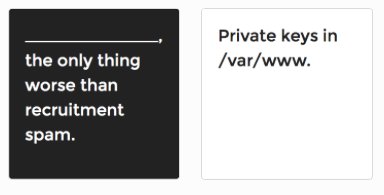 Look its a secret bunny meeting. What are they talking about? Veggies? Carrots? World domination? We will never know