@mcclure111 "Here, modern design's tendency toward cryptic, monochrome icons created a situation where VS Code seems to be communicating to me that setting barrels of oil on fire makes it happy"

@estellevw If I had a penny for every time I did this:

git commit -m "hopefully final edits, but who am I kidding?"

CS COURSE: create a computer from thin air! remember, calculators haven't been invented yet
MY PROGRAMMING JOB: write a script that takes a value from this API and shoves into this other API

You think your Thanksgiving is bad, my sister and her husband are arguing about best way to structure an SQL table/queries. So in order to bring harmony, I interrupted and suggested NoSQL/MongoDB instead. 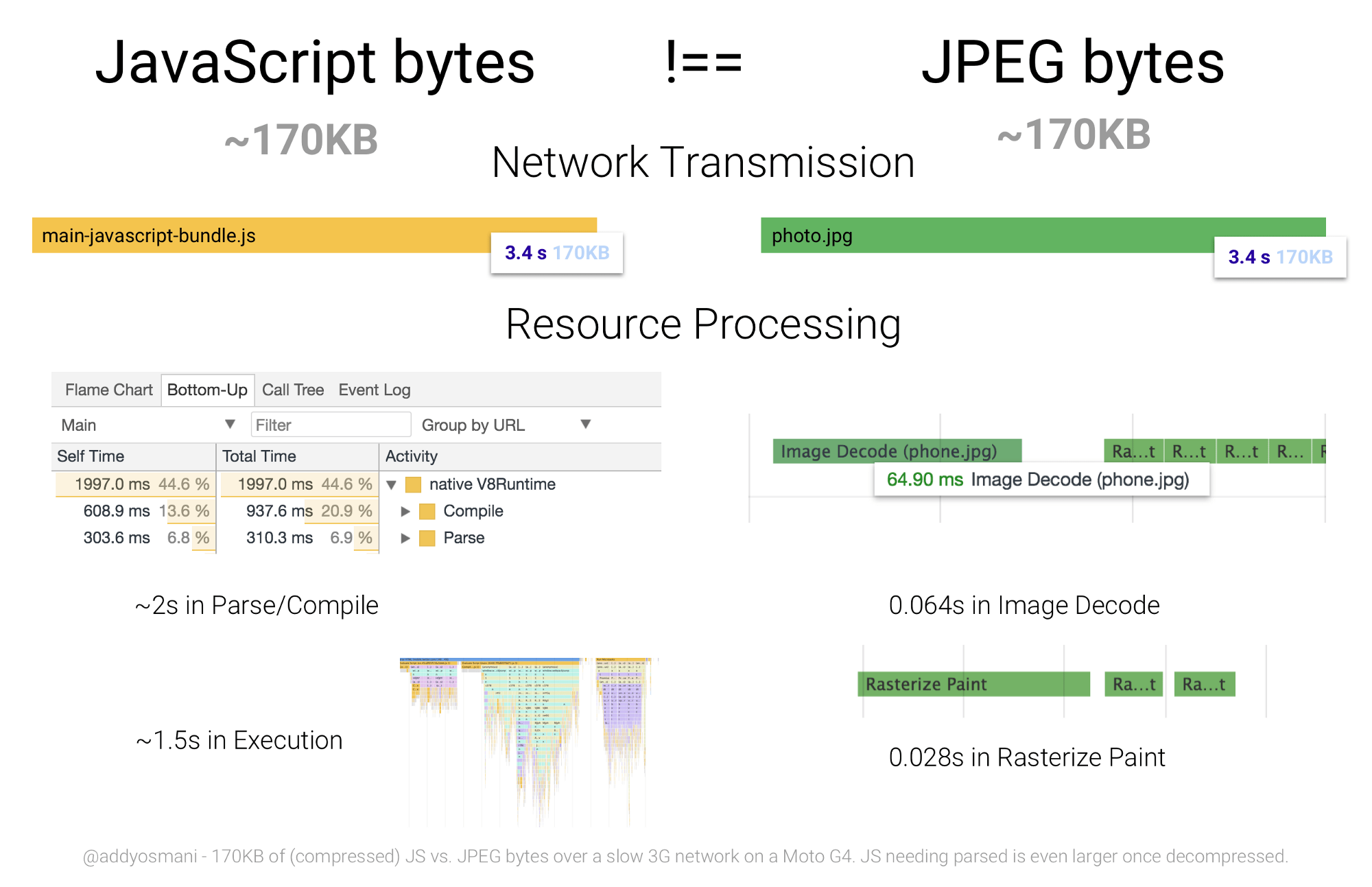 Casey Muratori There can always be one more div:

A lot of people complain about CSS because they wrap a div in a div and it doesn't align the way they expect.

What they don't understand is that if you wrap that div-in-a-div inside a div that is itself inside a div, then you can put that whole thing inside another div.

Jay Phelps 🧔🏻 Right, that makes so much sense:

related: if you console.log something with the devtools open it does not get garbage collected. This might seem like an obvious statement, but many forget and spend hours trying to figure out why the app is leaking memory

How it feels to debug a computer program, in chart form. The longer it takes, the more pain you feel until you solve it, then the endorphins kick in.

I'm so high right now that I just made this chart. 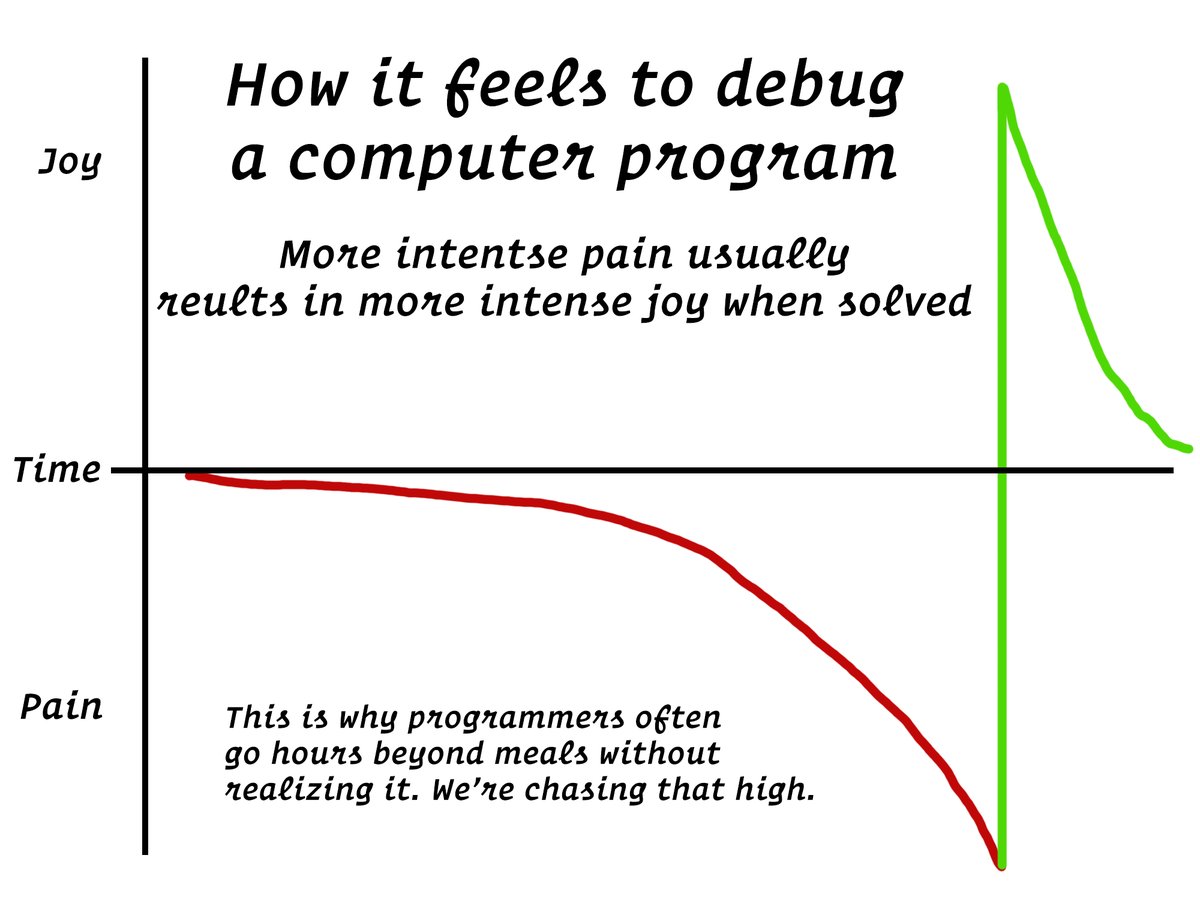 Chris Oldwood (if you don't understand the joke, you've made better life choices than I did)

In C++ how does one request access to the private members and functions of a class?

(Asking for a friend.)

The Push Train Managing the human side of continuous delivery:

Since in order to deploy software we have to write it first, we tend to start with things that make software easiest to write. Or the specific load of development baggage that we’re most comfortable with.

Then we hope that we can bang on some tooling and get working software in the end. There’s no reason to expect that this approach should work, or result in anything good. 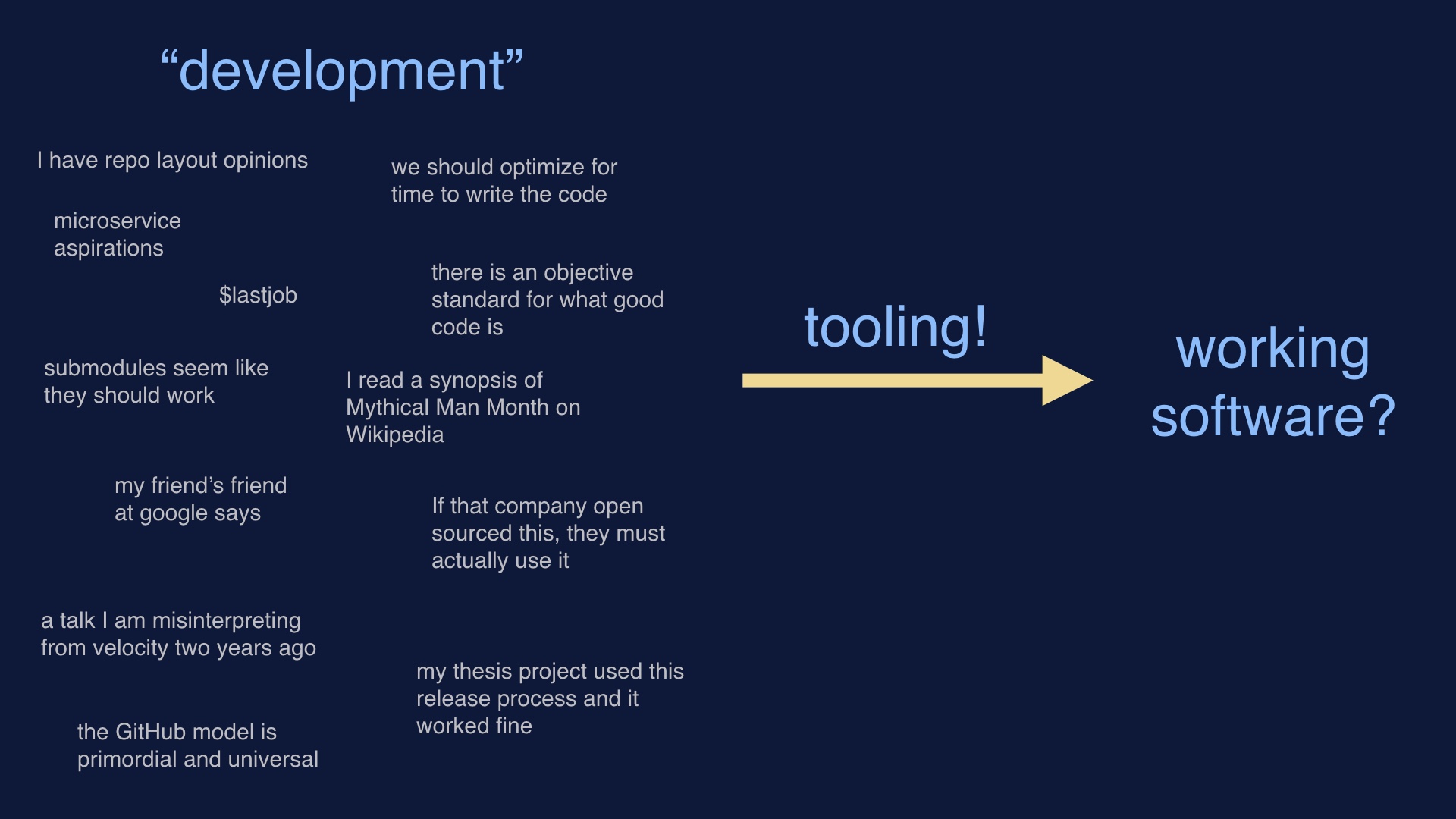 If code is "hard" to unit test maybe instead of jumping right into refactoring it so as to make it more conducive to unit testing, maybe we should rethink if the code is actually just a better fit for a different form of testing. Might seem like another radical idea to some. 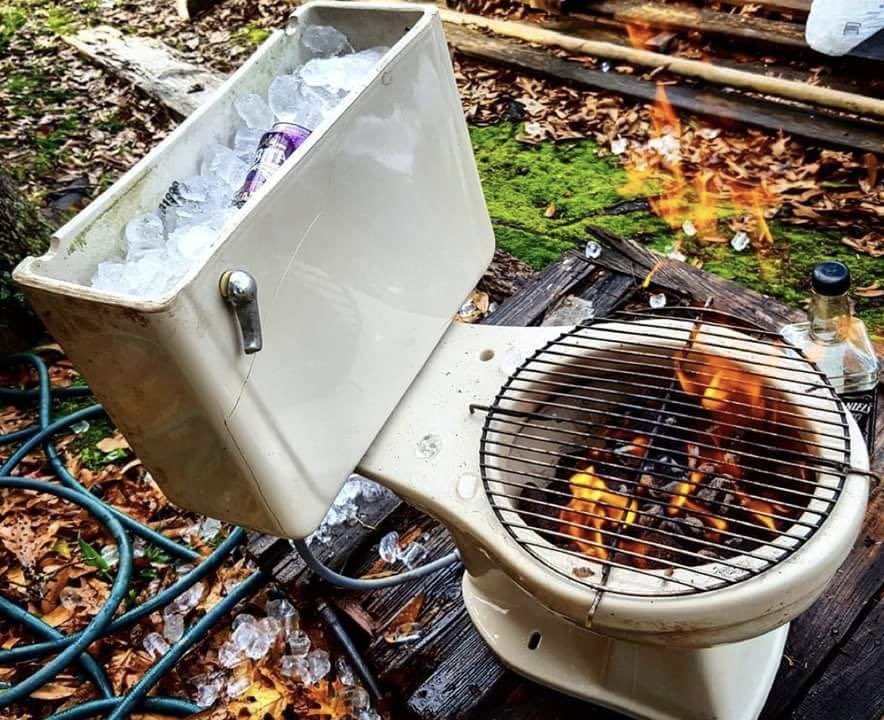 Monitoring will warn you your SSL certs expire tomorrow. Observability will only tell you they expired yesterday.

Rochelle So slow, incorrect, and also other people have access to your personal information?

I wonder if Expensify SmartScan users know MTurk workers enter their receipts. I’m looking at someone’s Uber receipt with their full name, pick up, and drop off addresses.

Two attackers accessed a private GitHub coding site used by Uber software engineers and then used login credentials they obtained there to access data stored on an Amazon Web Services account that handled computing tasks for the company.

@FioraAeterna Summarizing My analysis of the $1 million+ USD MyBTGWallet.com scam:

Amanda Berlin "Spreading awareness of this horrifying issue happening in this lovely country. People stuck in the wifi with no hope for rescue!" 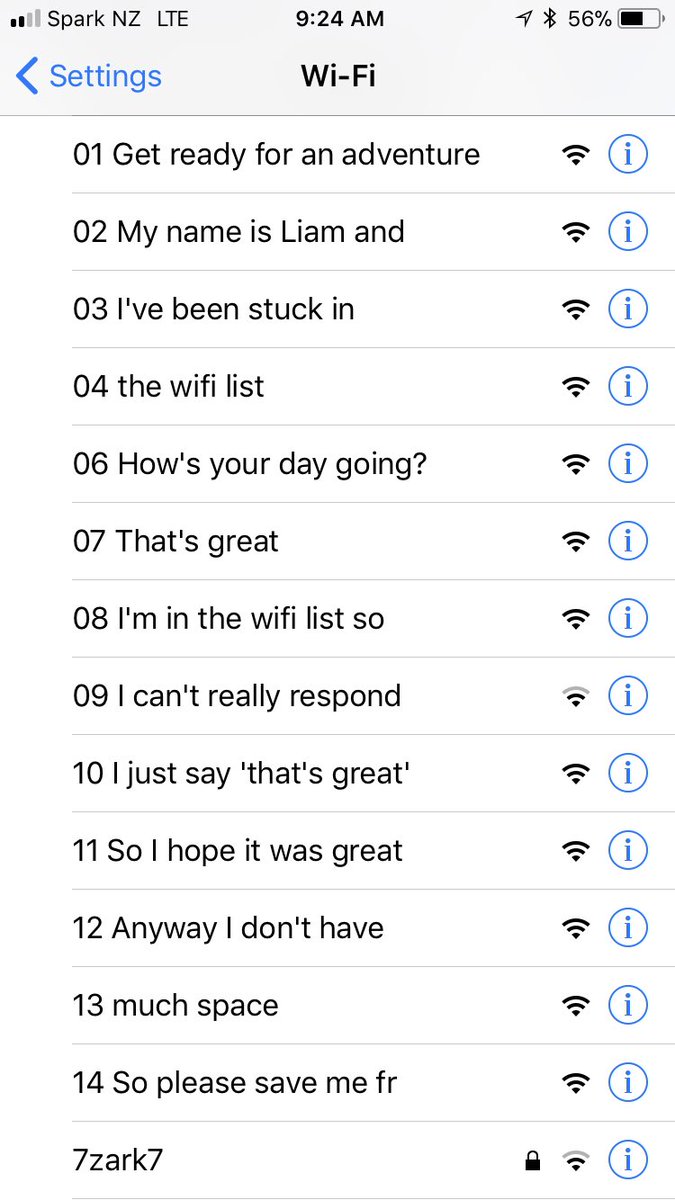 The Copernican Revolution from the Inside If you are scientifically minded, and lived in the time Copernicus, would you have accepted his model of the earth revolving around the sun? The answer may surprise you.

You have my permissions to use the blockchain if you must.

More than a Million Pro-Repeal Net Neutrality Comments were Likely Faked "It’s scary to think that organic, authentic voices in the public debate — more than 99% of which are in favor of keeping net neutrality — are being drowned out by a chorus of spambots." Also, semantic clustering.

So, this is next level insanity. I just received a letter from my bank saying that they do not have a current address on file for my account.

"*on which you’re willing to die" 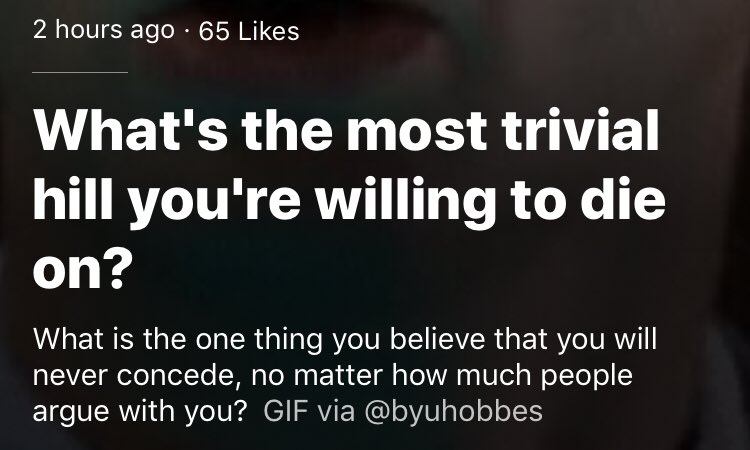 Ice Apocalypse "Next to a meteor strike, rapid sea-level rise from collapsing ice cliffs is one of the quickest ways our world can remake itself. This is about as fast as climate change gets."

McDonald's Followed by a remarkable save

There’s a cognitive bias you’re suffering from, which is to think a group you’ve identified as an antagonist thinks singularly in a way you don’t like because a given opinion has been expressed by a few within.