Form Usability: The Pitfalls of Inline Accordion and Tab Designs Multi-part forms have an inherit problem: it's never quite clear what changes are saved when you hit the save button. An exploration of how accordions and tabs confuse people and how to better design complex forms.

I understand you want me to interact with your product. Then let me interact. Don’t send me down a rabbit hole. Make my clicks count. Then I send you all my love and I am very happy to pay for your products.

Just what is it that you want to do?:

A Brief History of the Hamburger Icon With pictures.

The Good, the “Meh” and the Ugly A designer's look at US state flags: from the ones good enough for an NFL brand, to the ones so bad you don't even remember your state has a flag. 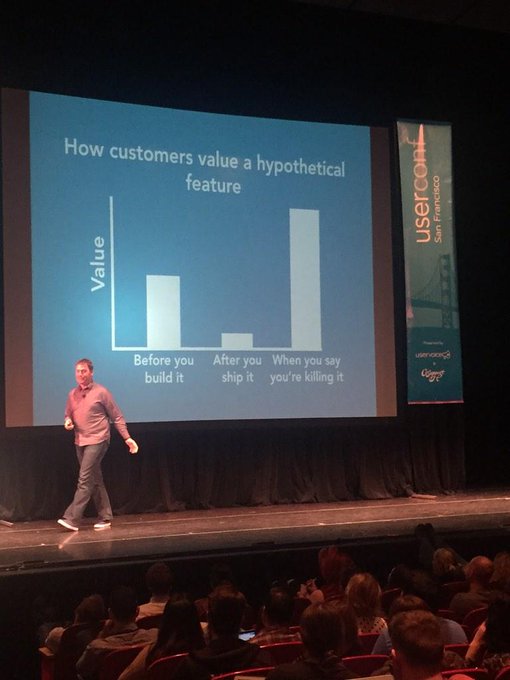 Problem Details for HTTP APIs "This document defines a "problem detail" as a way to carry machine-readable details of errors in a HTTP response, to avoid the need to invent new error response formats for HTTP APIs."

hget A CLI and an API to convert HTML into plain text. Can be used to fetch a site's HTML version and convert it into plain text, or to deliver plain text versions of your site dynamically.

For many people throwing away a code base is a sign of failure, perhaps understandable given the inherent exploratory nature of software development, but still failure. But often the best code you can write now is code you'll discard in a couple of years time.

Stop Using Constructor Functions in JavaScript I disagree with Eric that constructors violate the open/close principle. Separately, in JavaScript new Foo() can return a new instance of type Bar, so new is in fact a factory pattern. But there's no protection against forgetting the new, other than naming convention and constructor boilerplate, and so I'm also in the camp that advocates limited use of constructors.

Why Monster.com Is Failing And Others Will Follow I'm always skeptical of "why X is failing" articles that reduce complex situations to a single magic bullet. But in markets that succeed on product or service, both high on human touch, this rings true:

The Other Side of Diversity Just. Read it.

Drugs and alcohol. You mean drugs, period. Science Tumbled on the different ways in which alcohol affects our brain and body. Interesting that it affects so many brain paths.

Critics chafe as Macs send sensitive docs to iCloud without warning PSA: Apps like TextEdit and KeyNote auto-save the changes you make (you can turn this feature off), that way you can always restart where you left off. That's awesome feature, but means whatever you write gets uploaded to the cloud, even if it's just a draft. In fact, "Saving a document" is really just giving a name to an already auto-saved file.

Silk Road 2.0, infiltrated from the start, sold $8M per month in drugs FBI runs a long con on Dread Pirate Roberts and Defcon.

How Hackers Reportedly Side-Stepped Google's Two-Factor Authentication TL;DR When two-factor includes sending you an SMS, that SMS is not "something you have", it's more like "something any attacker could have for a moment, just long enough to hack you". Use a 2FA token app instead.

When Can the Police Search Your Phone and Computer? Know your rights.

Secure Messaging Scorecard EFF rates apps by how well they can keep a secret. From security sensitive apps like CryptoCat and Silent Phone, through mainstream apps like FaceBook and Skype, to the "you know these are wholly insecure?" apps like SnapChat and Secret.

Crypto attack that hijacked Windows Update goes mainstream in Amazon Cloud How bad is MD5 as a cryptographic hash? "I found that I was able to run the algorithm in about 10 hours on an AWS large GPU instance bringing it is at about $0.65 plus tax."

(* But you have to watch through a hundred ads)

Booster shots: The accidental advantages of vaccines BCG vaccine may more than just protect against tuberculosis: scientists are looking into other "non-specific effects".

The Trouble with Antibiotics Frontline investigates how the misuse of antibiotics in argiculture is leading to antibotic resistent bacteria that's killing us. Got to wonder, though, if antibiotics are liberally used because they fatten farm animals, what affect does it have on people who eat said animals?

The $9 Billion Witness: Meet JPMorgan Chase's Worst Nightmare How the government let JPM Chase off the hook with a slap on the wrist and then covered it up.

Every baby knows the scientific method.