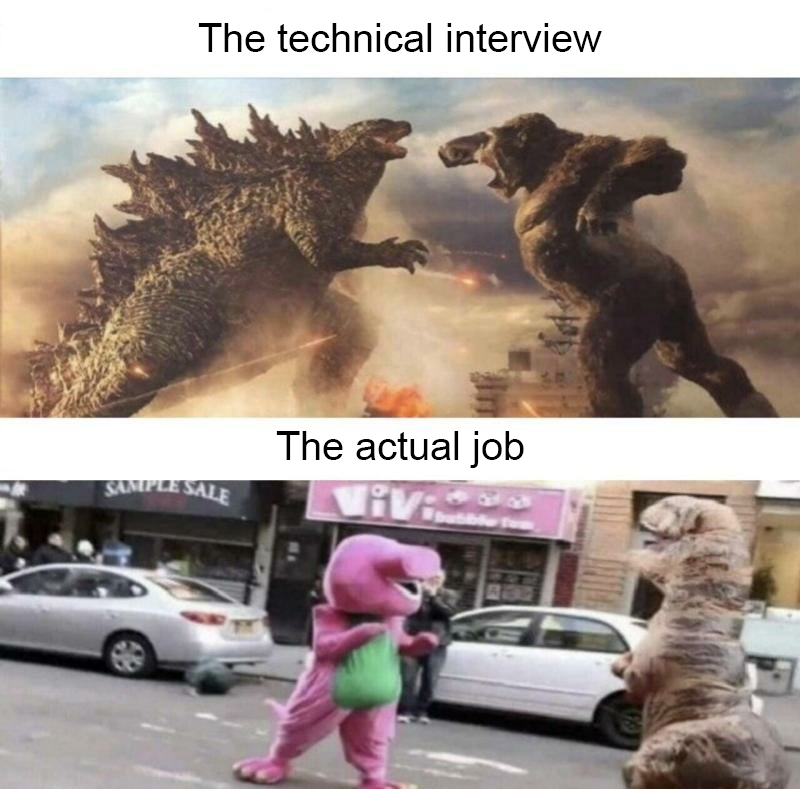 Ara Ghougassian “life of an Enterprise founder:
👈 what your designer wants     what buyers will pay for 👉” 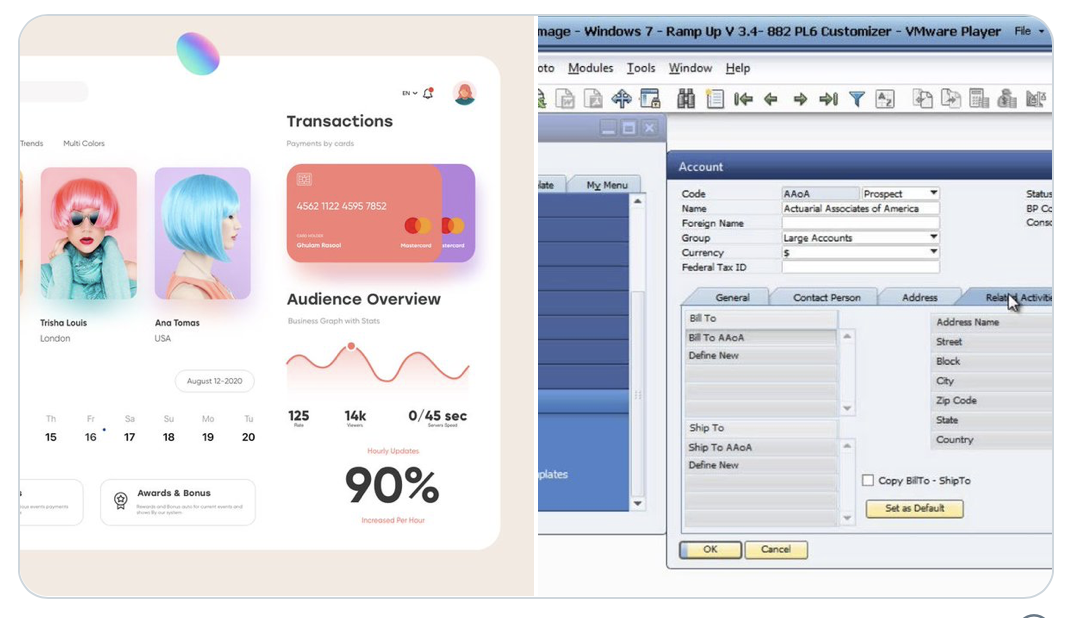 Jason Lengstorf 👇 This is a really good thread about choosing a stack of low-code solutions:

remember: we did all of this — user dashboards, custom databases, on-the-fly video editing — in a Next site that deploys to Netlify with a few serverless functions and SaaS tools. we deployed without ever having to think about containers or kubernetes or SSH-ing into a server 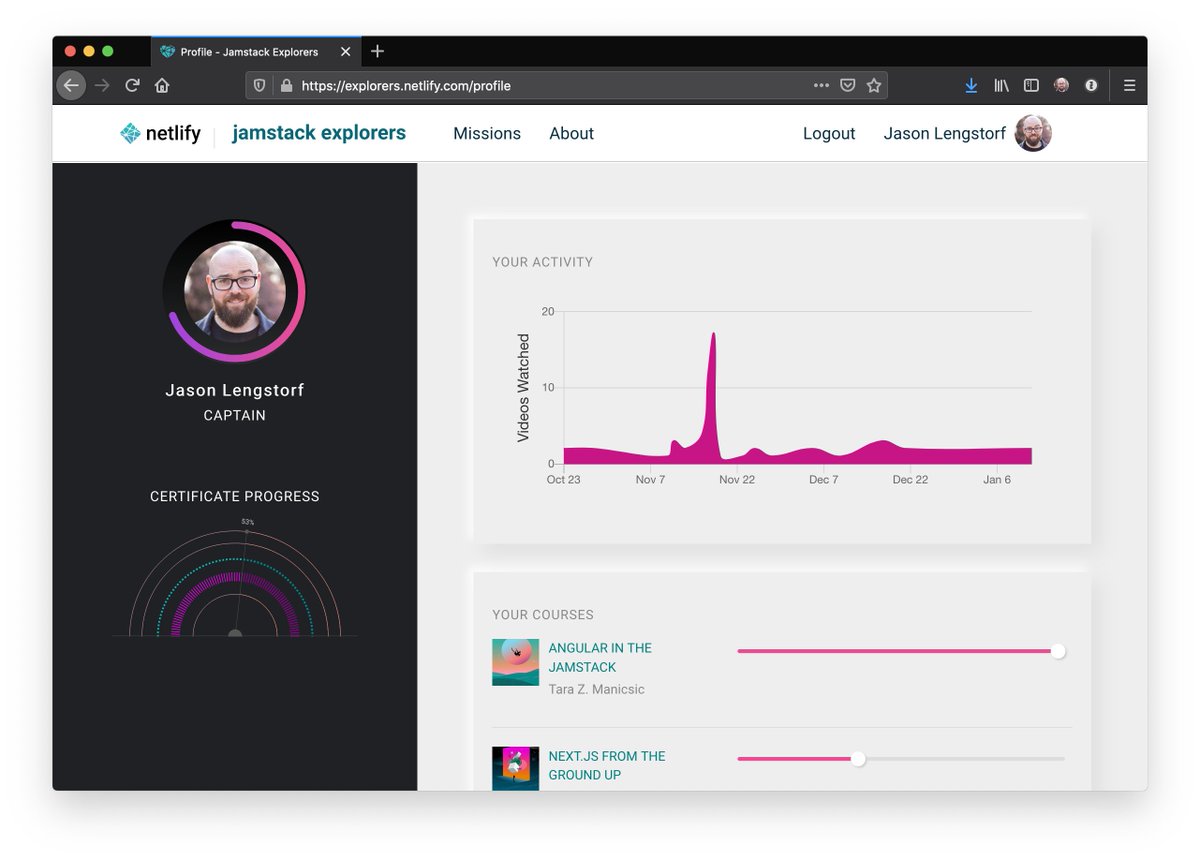 Stripe for Visual Studio Code This is a great example of DX (Developer Experience). You can watch real time events, test wenhooks on your local server, generate sample code, tasks that are otherwise tricky and time consuming. It also monitors that you don't check API keys to source control. All developer platforms should offer something like this (*cough*Twilio*cough*)

Systems design explains the world: volume 1 Sometimes you need some boxes and arrows:

Most of all, systems design is invisible to people who don't know how to look for it. At least with code, you can measure output by the line or the bug, and you can hire more programmers to get more code. With systems design, the key insight might be a one-sentence explanation given at the right time to the right person, that affects the next 5 years of work, or is the difference between hypergrowth and steady growth.

Mislav Marohnić “Just found out that we can set margins in iTerm so that terminal contents does not touch pane borders. No more reading text glued to the very bottom of the screen. This changes everything” 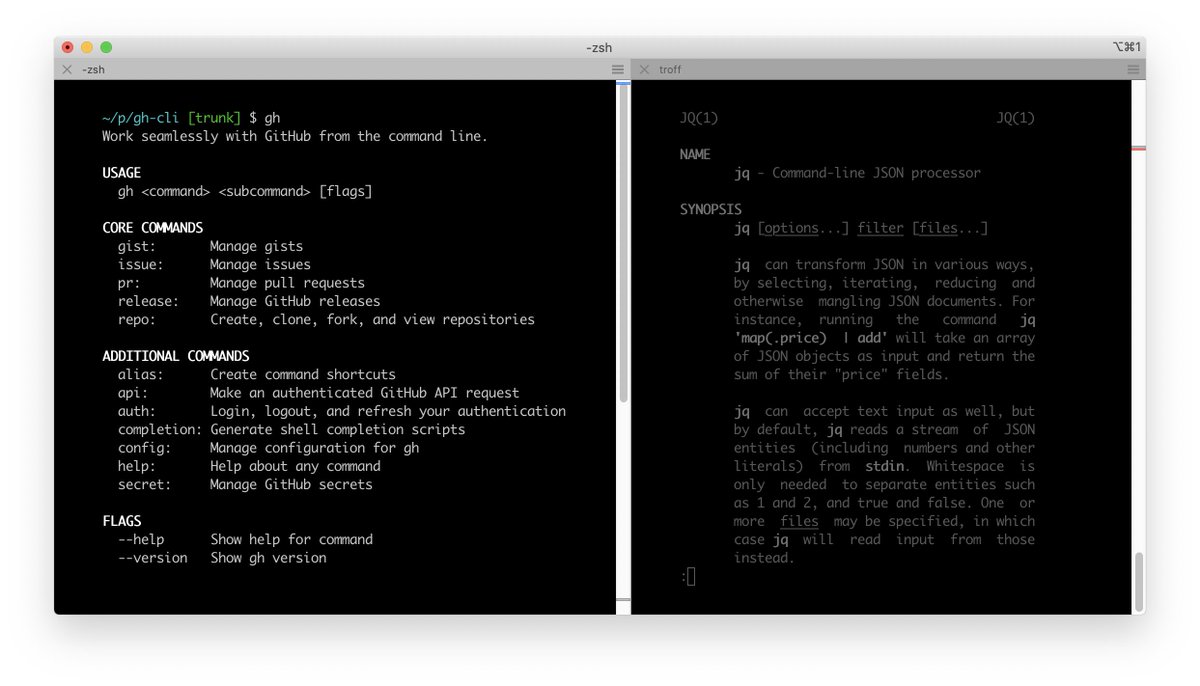 ow Just here using ow to validate function arguments and catch errors early. This is one place where a chainable API is a joy to use: ow.string.alphanumeric.maxLength(30).

cloudfour/lighthouse-parade Command line tool that crawls a domain and gathers lighthouse performance data for every page. 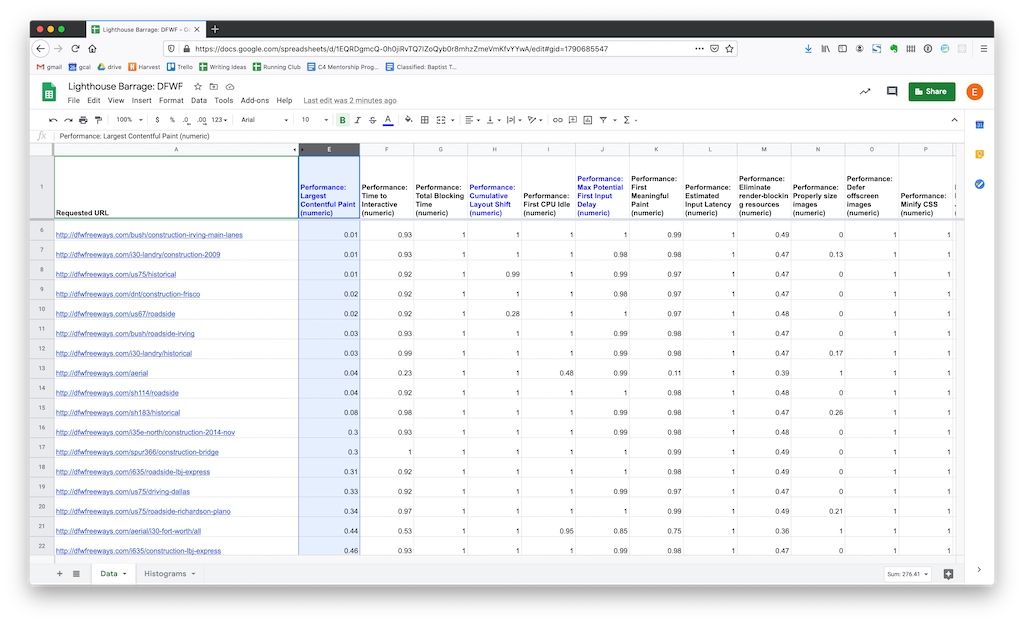 Get Ready For ESM Node 10 is end-of-life in this coming April. It’s not going to stop working, but anyone who cares to keep their app updated, would be switching to Node 12/14. Node 12 forward support JavaScript modules. If you’re releasing a new library, or making a major upgrade (2.0 → 3.0), likely most of its users are already on Node 12/14.

AKAspanion/ui-neumorphism If you feel like "new skeuomorphism" is a trend that you need to be onboard, here’s a React library for you. 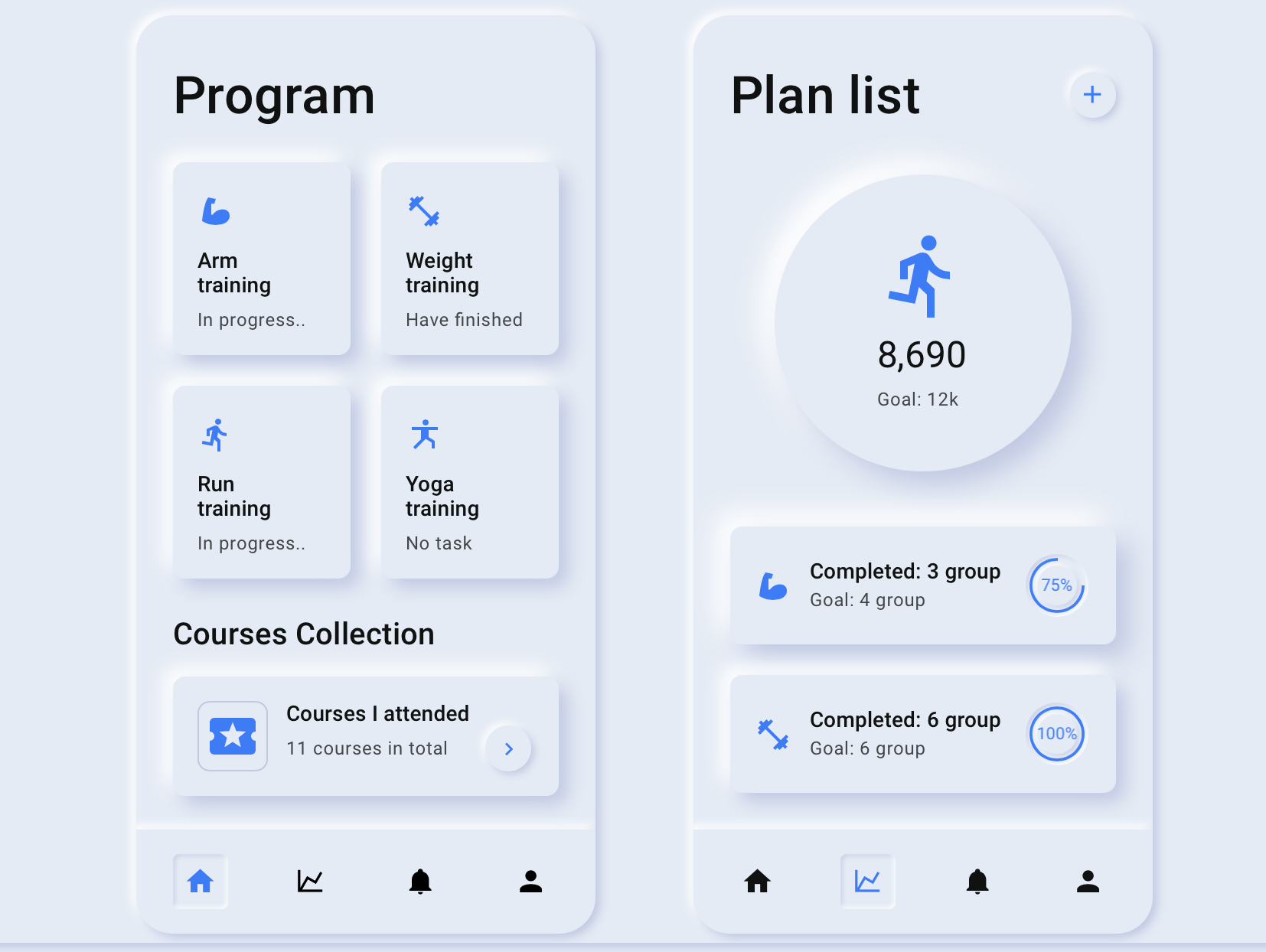 Modern Retro Computer Terminals When you want your computer to look boldly different, but in a classic way.

The goal for this project is to design, 3D-print and assemble the enclosures for several small desktop computers. This series was created during the covid19 pandemic, to get familiar with modern parametric 3D design tools, the limits of 3D printing and fabrication. 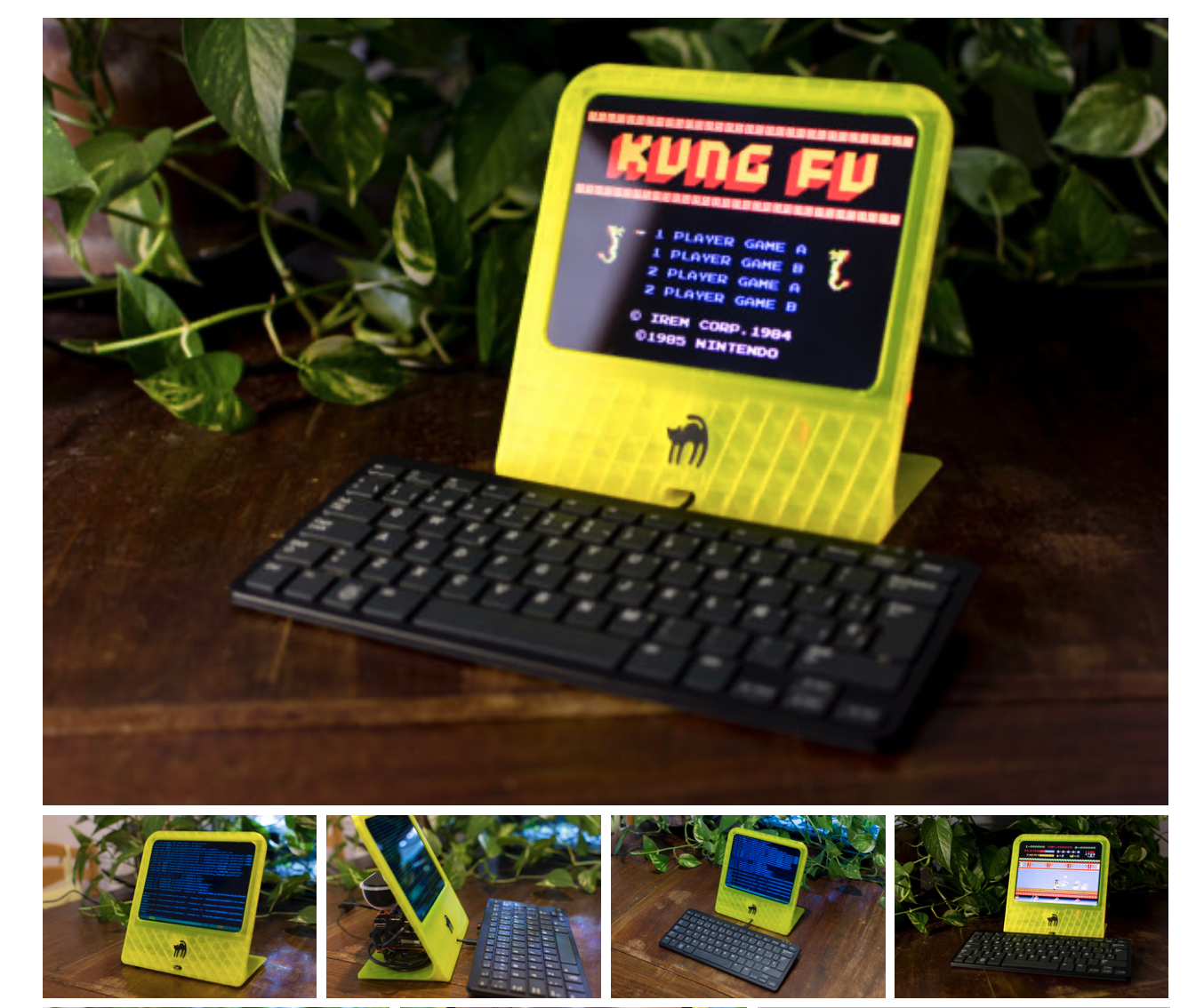 This Kate is disputed 😆

when you're very big, rain feels like a gradual increase in wetness. but when you're very small, you might not know the rain is there at all, until a raindrop hits you dead-on, and then suddenly your whole world is upside down.

"Kate does that mean we can merge the PR or not?"

Nedim F When it comes to user input — trust but verify. Apparently, TikTok limits videos to 1 minutes by checking the uploaded file metadata. If you create a 5 minute WebM video file, then edit the file’s metadata to say it’s only 1 minute long, TikTok will accept your version of events.

But here's my conjecture to end the thread:

Please give that some thought the next time you're attending or organizing one.

Forrest Brazeal “output of every "2021 roadmap" meeting happening this week” 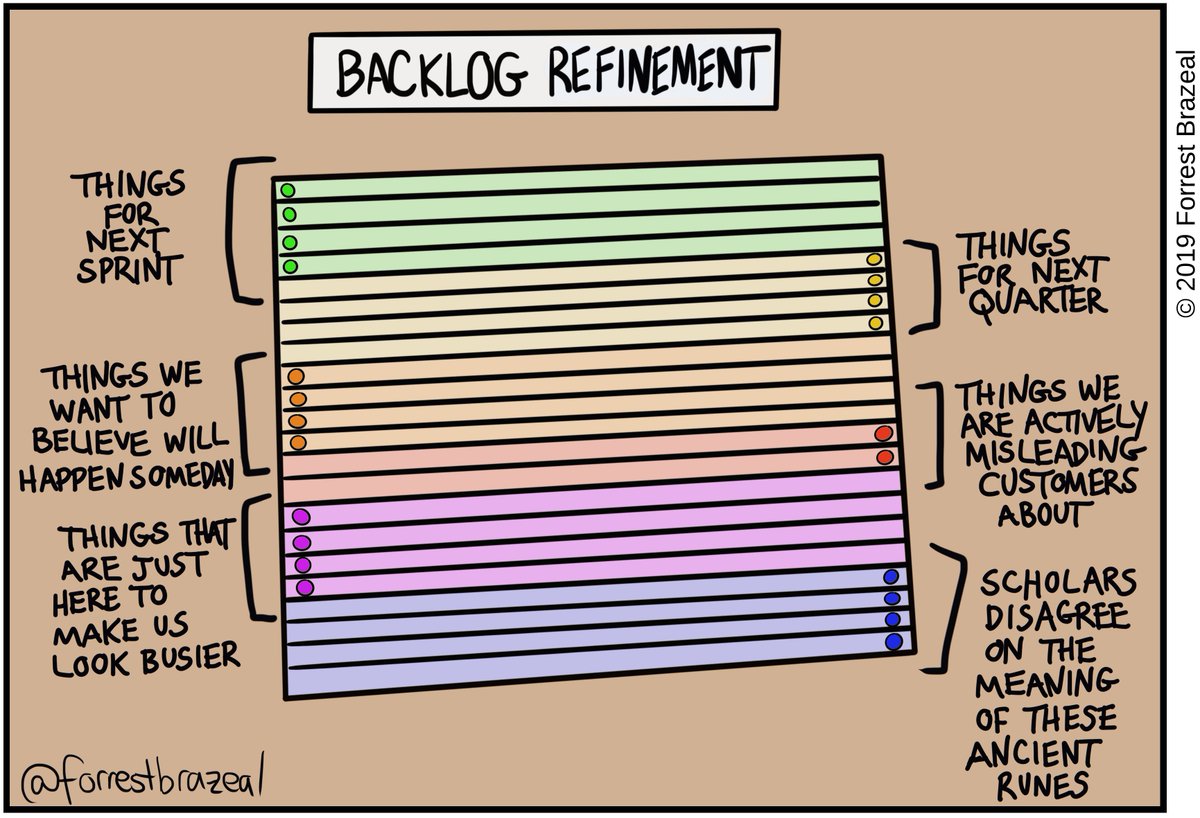 Intel has to be better than ‘lifestyle company’ Apple at making CPUs, says new CEO Whenever a company lose its competitive edge, one of two things happen. A moment of reckoning, followed by a turn around, pain out of which emerges a better business. Or the company resigns to the fate of being a laggard. But first, it must bargain with the loss. Step one, dismiss the competition as unworthy, and in the same breath, frame customers that leave you as ill-informed:

“We have to deliver better products to the PC ecosystem than any possible thing that a lifestyle company in Cupertino” makes, Gelsinger reportedly told Intel employees. “We have to be that good, in the future.”

Lost Passwords Lock Millionaires Out of Their Bitcoin Fortunes What's worse than not making $220m from Bitcoin? Making $220m and then losing the password to your wallet. The greatest invention of Bitcoin is all the different ways in which you can lose access to your money:

Of the existing 18.5 million Bitcoin, around 20 percent — currently worth around $140 billion — appear to be in lost or otherwise stranded wallets, according to the cryptocurrency data firm Chainalysis.

Millions Flock to Telegram and Signal as Fears Grow Over Big Tech “The encrypted messaging services have become the world’s hottest apps over the last week …” First of all, Telegram isn’t encrypted by default and can only encrypt 1:1, not all conversations. WhatsApp has better encryption than Telegram. If you care about encryption, use Signal or iMessage. OTOH Telegram is a solid messaging app with a breadth of features, which matters here because the network size grows out of supported use case. It's the only real contender to WhatsApp. (And yes, you can find me on Telegram)

BNO News The point in the abusive relationship, where the abuser takes it all back, but later they'll go and do it again:

An Absurdly Basic Bug Let Anyone Grab All of Parler’s Data As a parting gift, Parler content was uploaded to the Internet Archive, moments before AWS pulls the plug:

By Monday, rumors were circulating on Reddit and across social media that the mass disemboweling of Parler's data had been carried out by exploiting a security vulnerability in the site's two-factor authentication … The truth was far simpler: Parler lacked the most basic security measures that would have prevented the automated scraping of the site's data. It even ordered its posts by number in the site's URLs, so that anyone could have easily, programmatically downloaded the site's millions of posts.

Usenet Spam: a Slice of History The spam wars of the early internet look so quaint in retrospect:

At the same time, another vigilante group, not quite high up enough in the nerd hierarchy to take part in the high level policy discussions but still wanting to be involved, formed a parallel vigilante group around the activity of complaining about spammers to their Internet Service Provider and getting them kicked off the Internet.

That’s it. It’s over. It’s really over. From today, Adobe Flash Player no longer works. We’re free. We can just leave So tell us, how do you really feel about Flash?

Post-Flashpocalypse, we stumble outside, hoping no one ever creates software as insecure as that ever again

an employee at Microsoft-owned GitHub went on an internal Slack chat room to tell coworkers in the greater Washington, DC, area to "stay safe homies, Nazis are about," with a sad emoji.

… That same day, the human-resources department reprimanded the employee, who is Jewish, for using the word "Nazi" in the workplace.

On Friday, two days later, the employee told Insider he was terminated, with human resources citing unspecified "patterns of behavior."

Incidentally, Substack CEO Chris Best appeared today with Parler CEO John Matze on the Megyn Kelly Show, to discuss “tech censorship, President Trump's ban from Twitter, the rise of independent media, free speech, [and] what everyday Americans can do to fight back.”

Substack announced a while back that they subscribe to the 3 pillars of faux-neutral content moderation: that all speech deserves a platform, that the onus is on users to filter content they don't like, and that the platform will never moderate, except that it will moderate sexual content and all content with legal exposure.

New Year, Same JJ: “Reading this, I almost felt bad for Parler’s lawyer.” TL;DR Amazon stops service for Parler. Parler turns around and “sues” Amazon. Not really, they don’t hire an antitrust litigation lawyer, but grab the first lawyer they could get to lodge some flimsy complaint with the court. Amazon, on the other hand, comes prepared and brings the receipts: 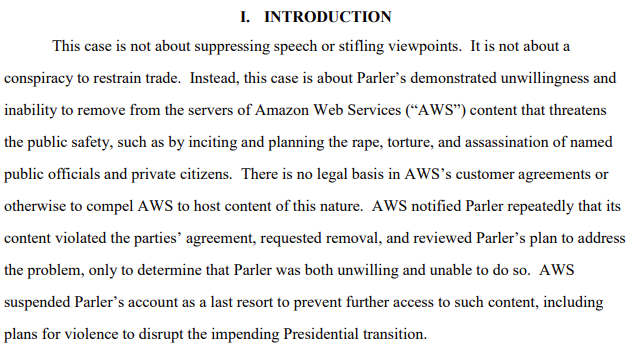 A running list of corporate responses to the Capitol riot Some corporations will “suspend contributions to those who voted against the certification of the election results”. 👏 Meanwhile, other corporations apparently can’t tell the difference between democracy and anti-democracy, so they’re going to pause all political contributions until the end of the news cycle. We see you. But also, if this is what it takes to get money out of politics …

The true story behind the viral TikTok sea shanty hit was likely written by a teenage sailor or shore whaler in New Zealand in the 1830s. Also, with background music, electronics, and featuring Kermit the frog.

sea shanties are popular right now because behavioral synchrony feels really, really good to humans and many of us have been social distancing for months and deprived of this, thanks for coming to my ted talk

Hijack Your Feed Sprinkle some productivity into your doomscrolling: hijack replaces Twitter ads with your todos. 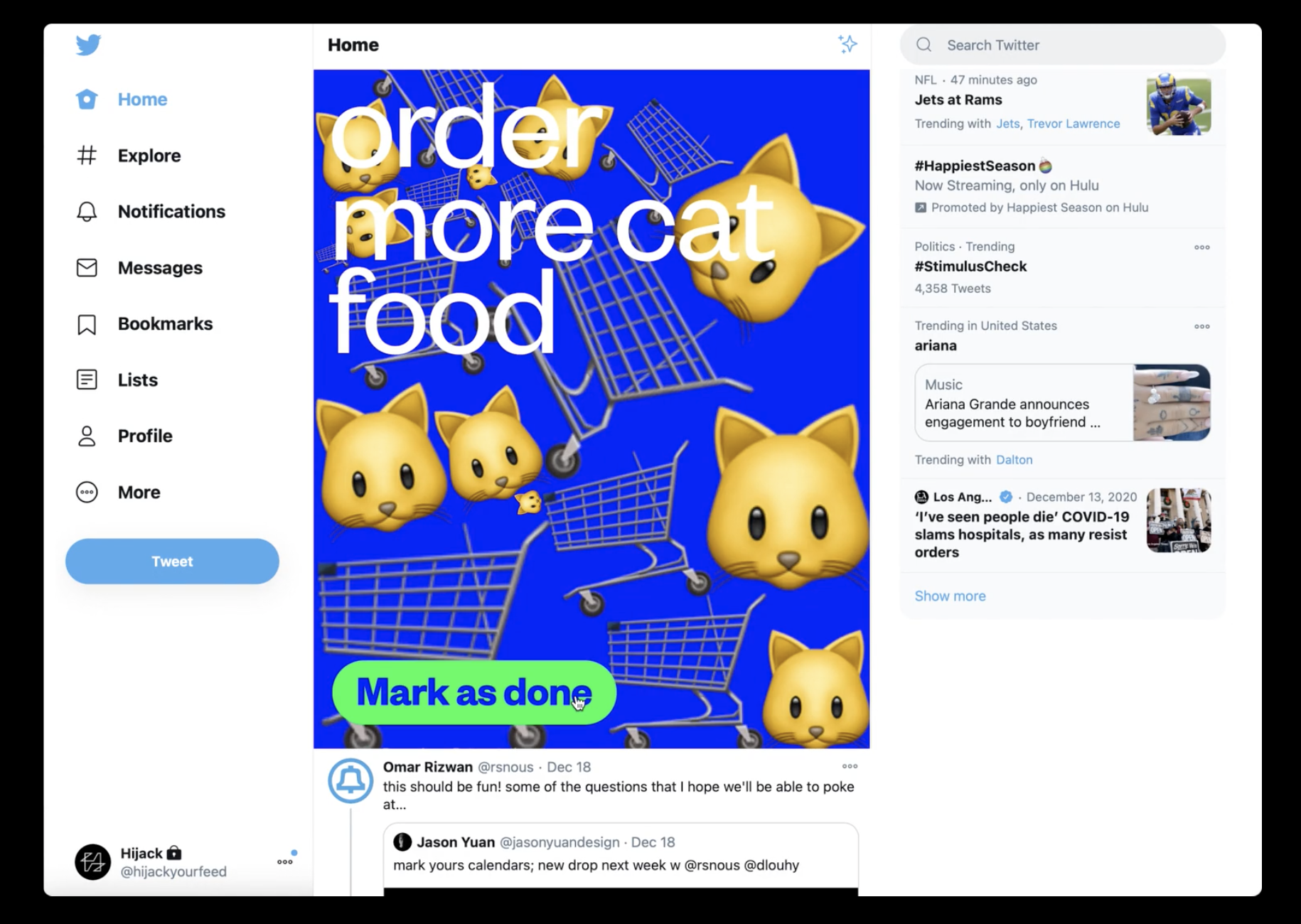 guy who's currently deploying a schema migration to change the type of presidents.impeached from bool to int

Running a household with two small children is a little like being the hotel manager at a B&B.

You get up early. Tidy the house. Get breakfast ready. Pack lunches.

And then prepare for your guests to come down from their rooms and complain about the food and accommodations.

James Kelleher “Imagining the furious email that led to this correction” 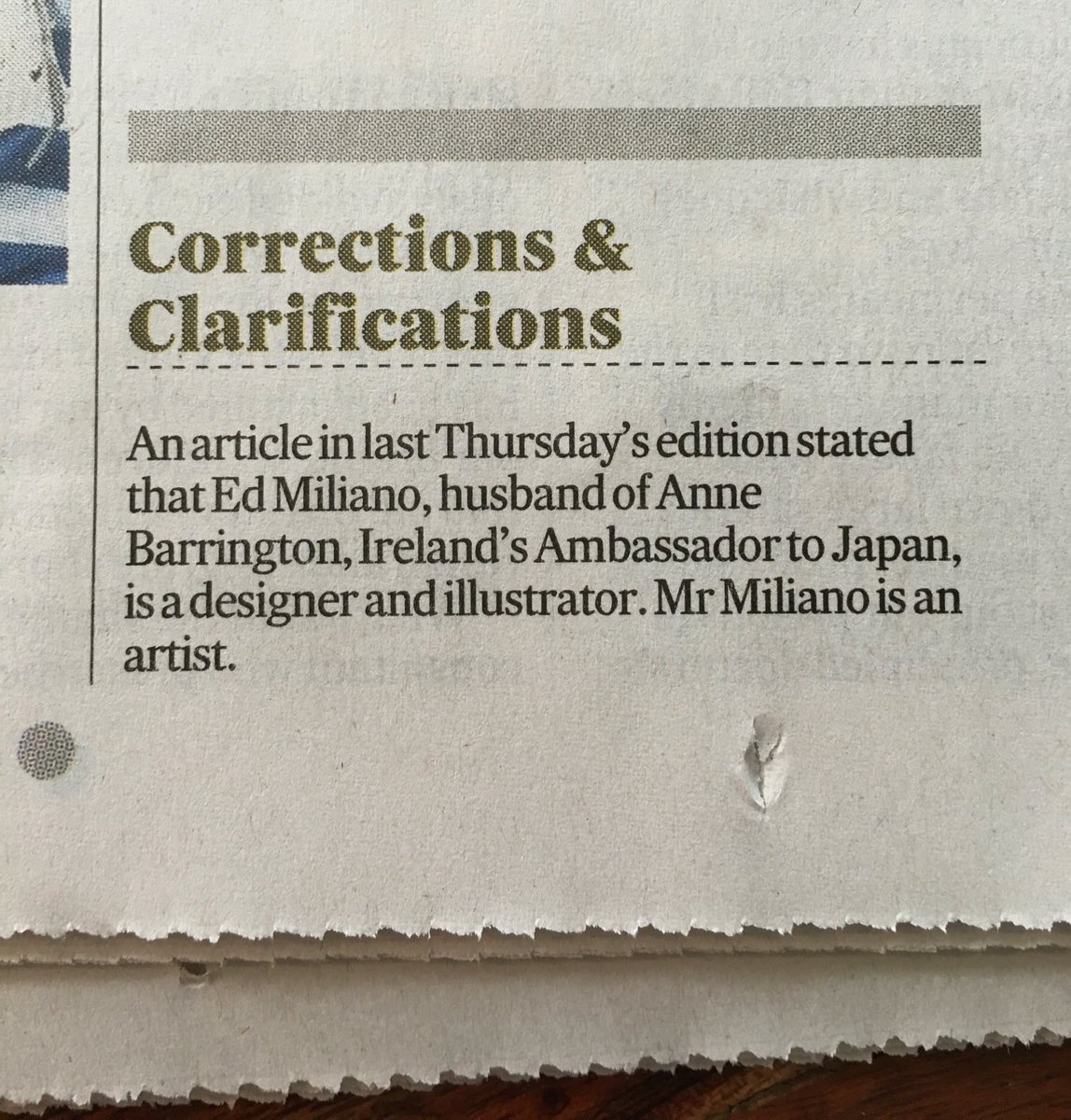 There are already many Black cyclists — we just overlook them These stereotypes — the Lycra outfits, the carbon frames, the rolling hills as background — are deeply rooted in classism and racism:

Perhaps the issue has to do with how we define “cyclists.” Sure, we can look at cycling’s traditional power structures and blame inherent racism and classism, but those aren’t the only reasons. Many cyclists — and I count myself in this group — have clung to old stereotypes of the narrow look and feel of a “cyclist,” instead of embracing all people who ride a bicycle.

Block Party “Use Block Party to filter out unwanted @mentions from Twitter, and continue to use Twitter as normal.”

After You Die, Microsoft Wants to Resurrect You as a Chatbot We’ve seen that episode of Black Mirror. 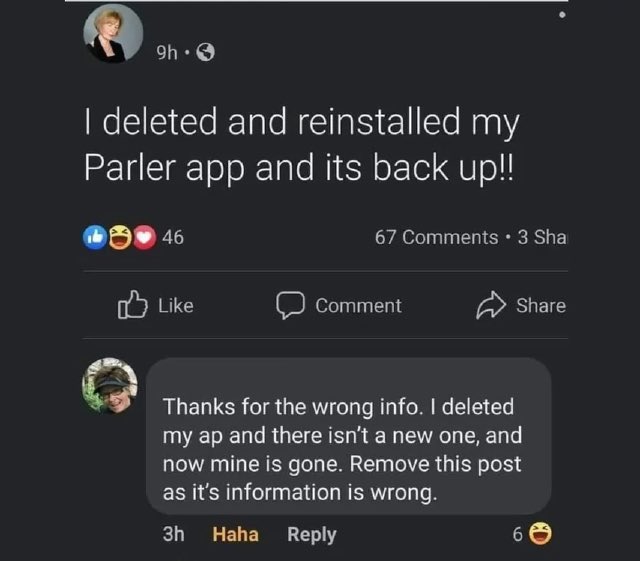 I Am the Designer of This Restaurant’s Outdoor Seating Space, and This Is My Artist’s Statement On the nose:

My work seeks to interrogate the parameters by which we define and demarcate physical space, exploring the fertile liminal zone between the falsely binary notions of “indoors” and “outdoors” we too often take for granted. I am compelled by asymptotes: What if you could get infinitely close to being indoors, while remaining, by some convoluted set of standards, outdoors? I am also intrigued by the extent to which perception can shape reality: What if all it took to be outdoors was a simple belief that you were? Finally, and perhaps most urgently: how many tables can I fit in here? 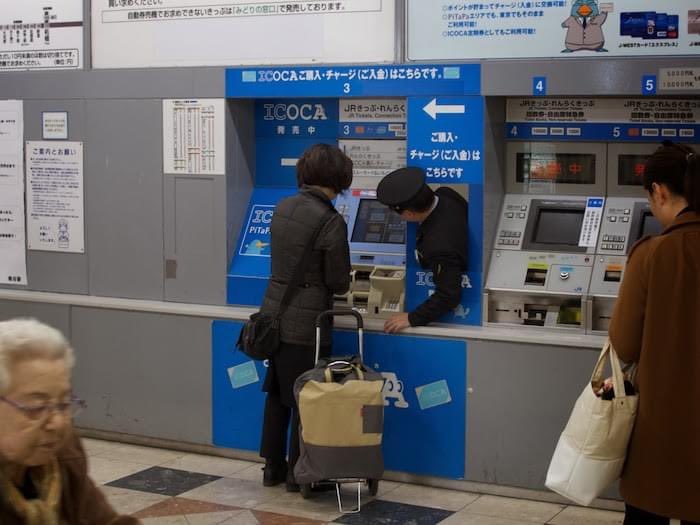