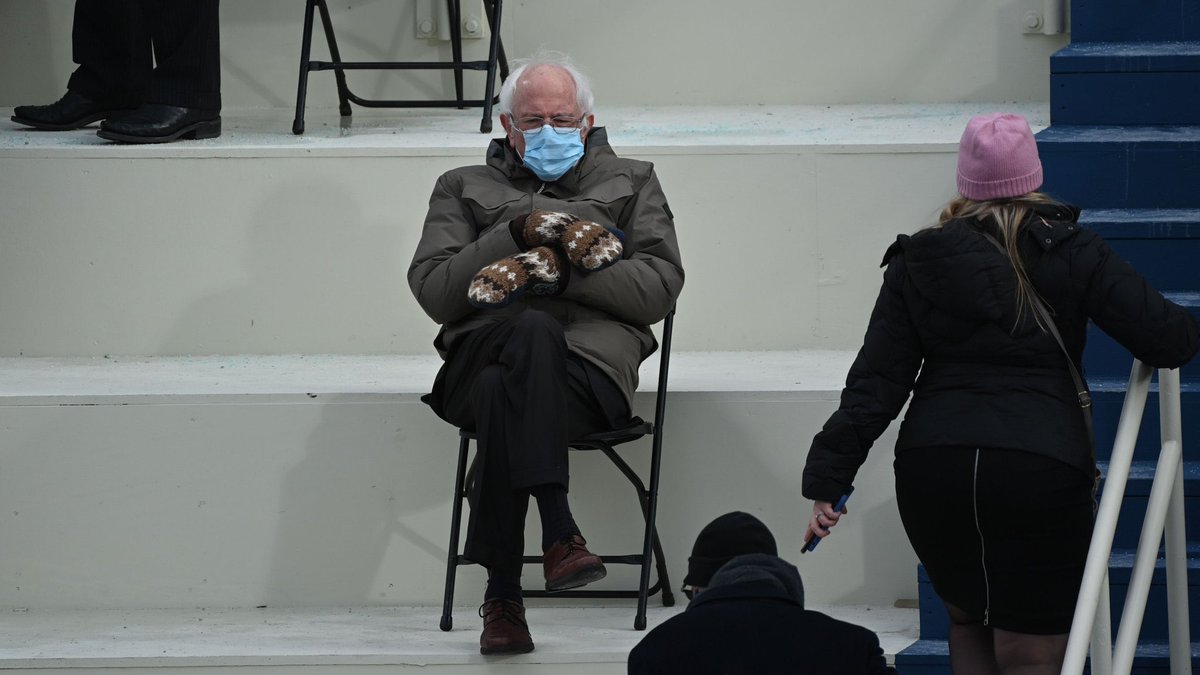 stim duncan “This could have been an email”

Design Principles For The Web This article talks about design principles in general, it applies to so many things other then web. And especially, I agree that it's not a design principle unless it challenges you:

We’re saying something is valued more than something else and that’s what you want from design principles is to figure out what the priorities of this organization are. What do they value? How are they going to behave?

Designer as Writer There are a lot of parallels between design and writing. They're both creative, deal with narratives, and drafts. This article has an interesting 3-column UI. At first I found it distracting, but then it made reading easy, somewhat like how an e-bike helps you pedal faster. 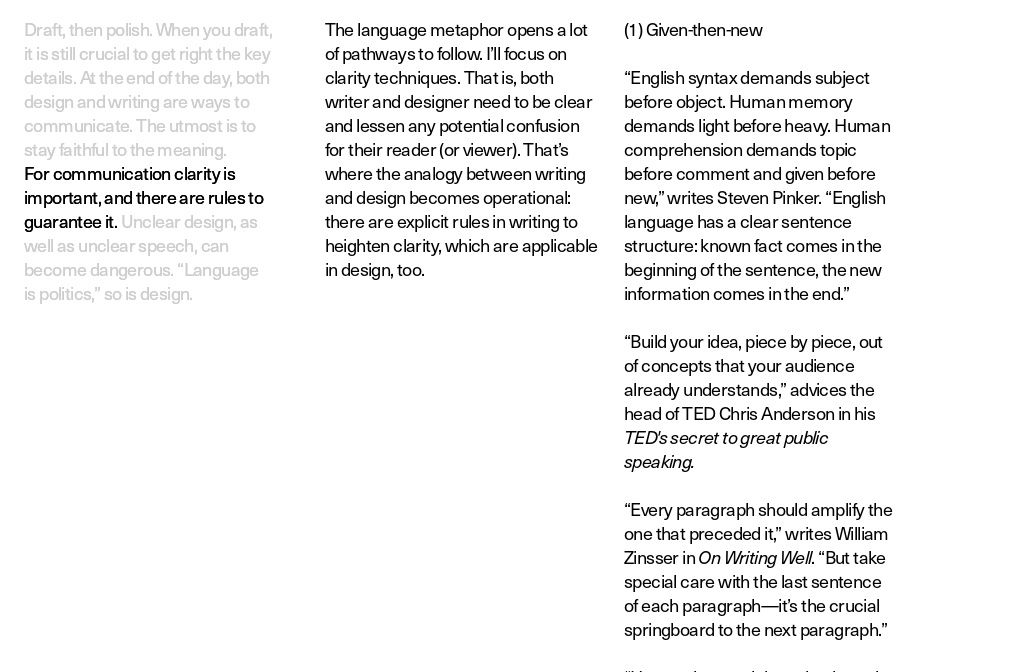 Hush “Noiseless browsing”, I like that term. This is a tiny app that blocks nags to accept cookies and privacy invasive tracking. Safari only, macOS/iOS, open source, so maybe you can port it to Android/Chrome. Free. 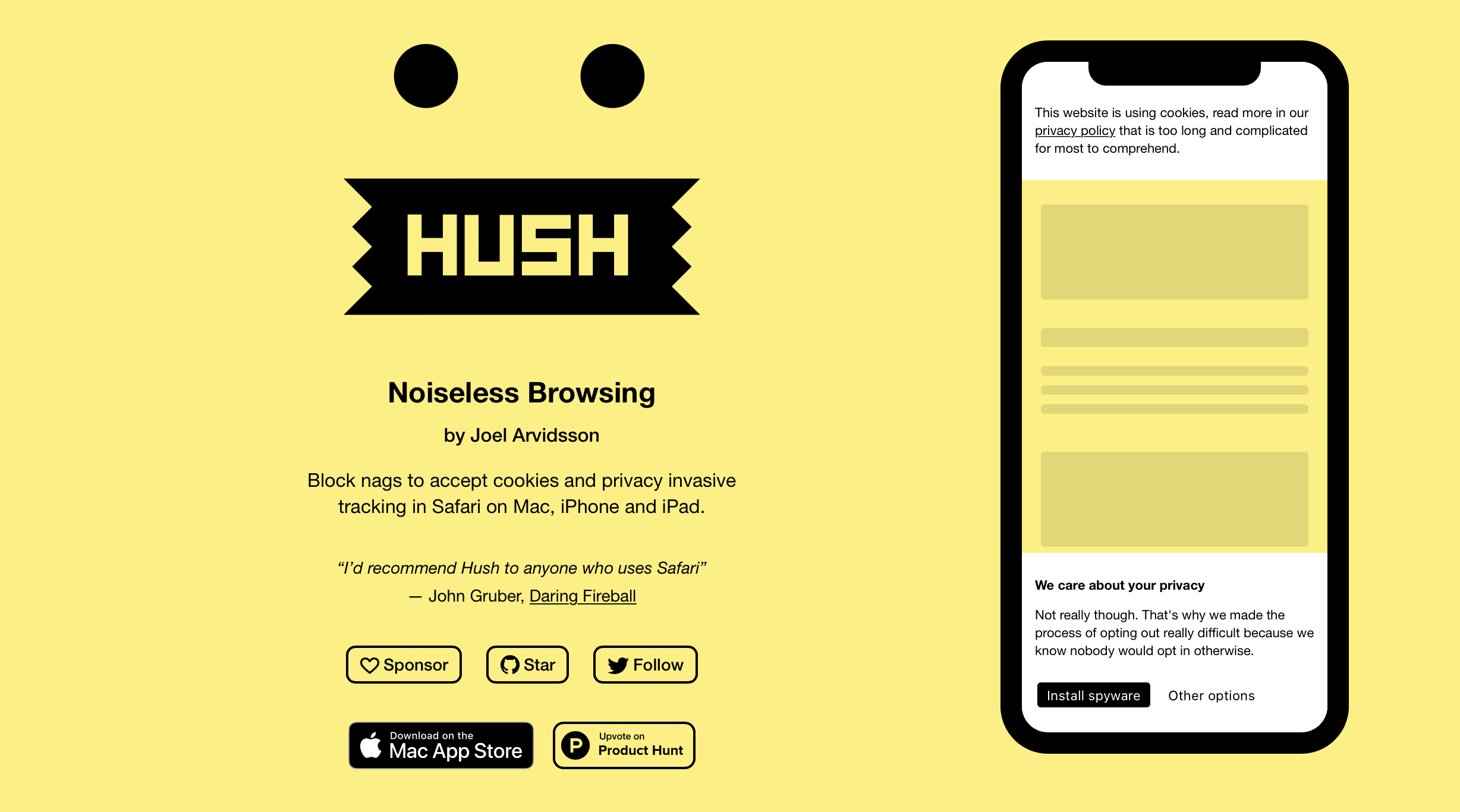 Beeper Yes! One app to replace all your messaging apps. Supports iMessage, WhatsApp, Signal, Instagram, Twitter, Discord, Telegram and 6 others. It uses the Matrix federated messaging protocol, and the server is open-source, if you want to self-host for privacy. $10/month and there's a waiting list, so I didn't get to check it out yet (but if you can spare an invite …)

leits/MeetingBar macOS menu bar item that shows your upcoming meetings. Not just a calendar app, it can pull meeting from 20 different services (Zoom, Meet, Webex, Teams, etc). Looks like this will pair well with Beeper. Free. 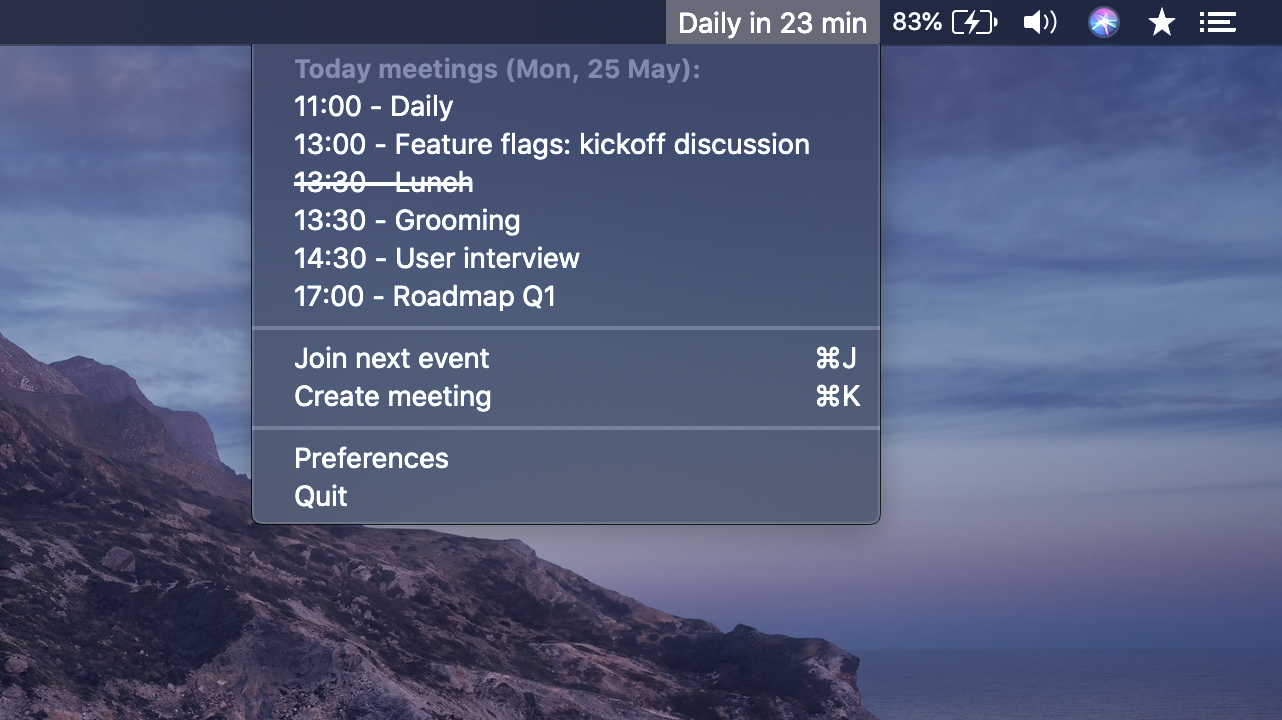 Altair GraphQL client app with tons of features. I’m taking this one for a spin. 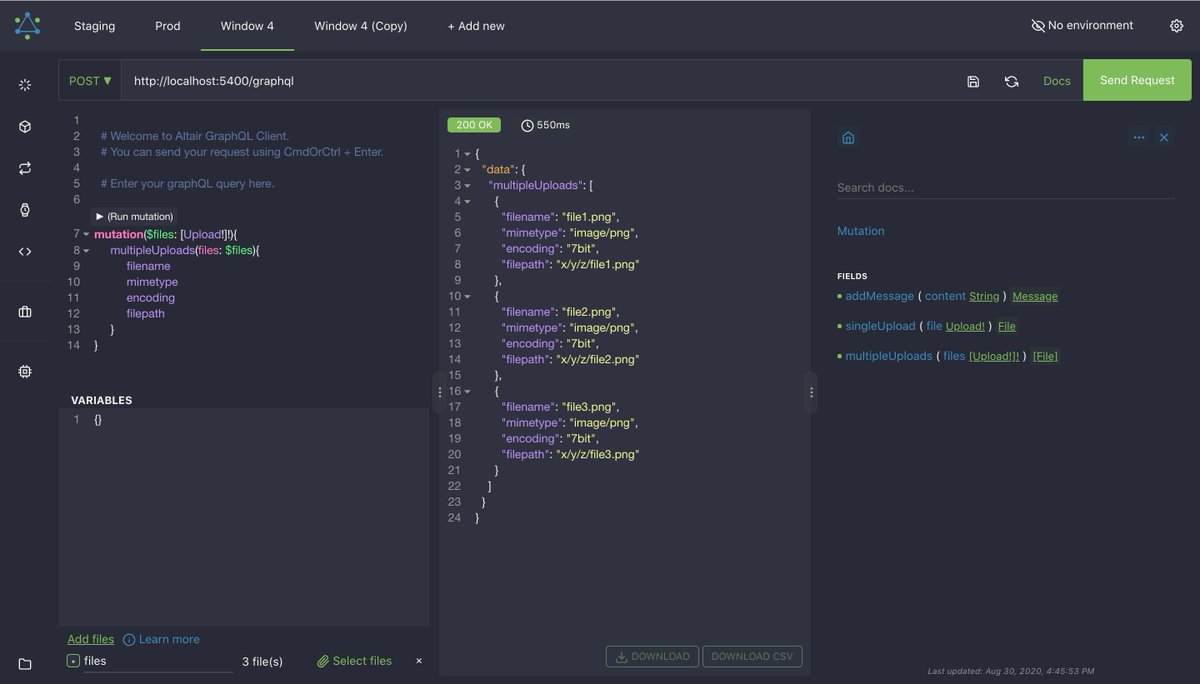 Nadeem Bitar It’s called “Confware” — software that exists for the purpose of giving a conference talk:

The @reactjs and relay team keep releasing one experimental thing after the other without ever releasing them. Suspense and Concurrent mode were announced at React Conf in 2018. 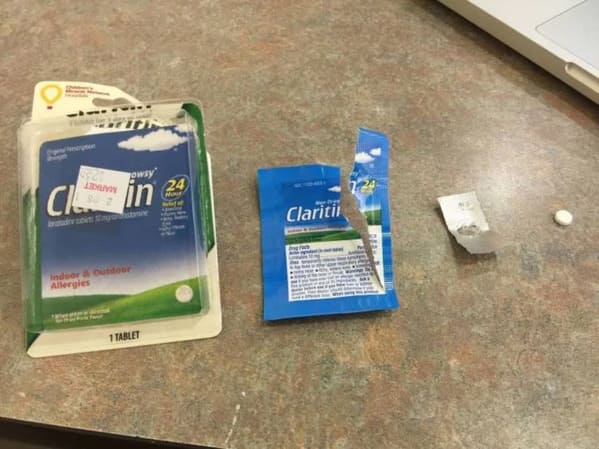 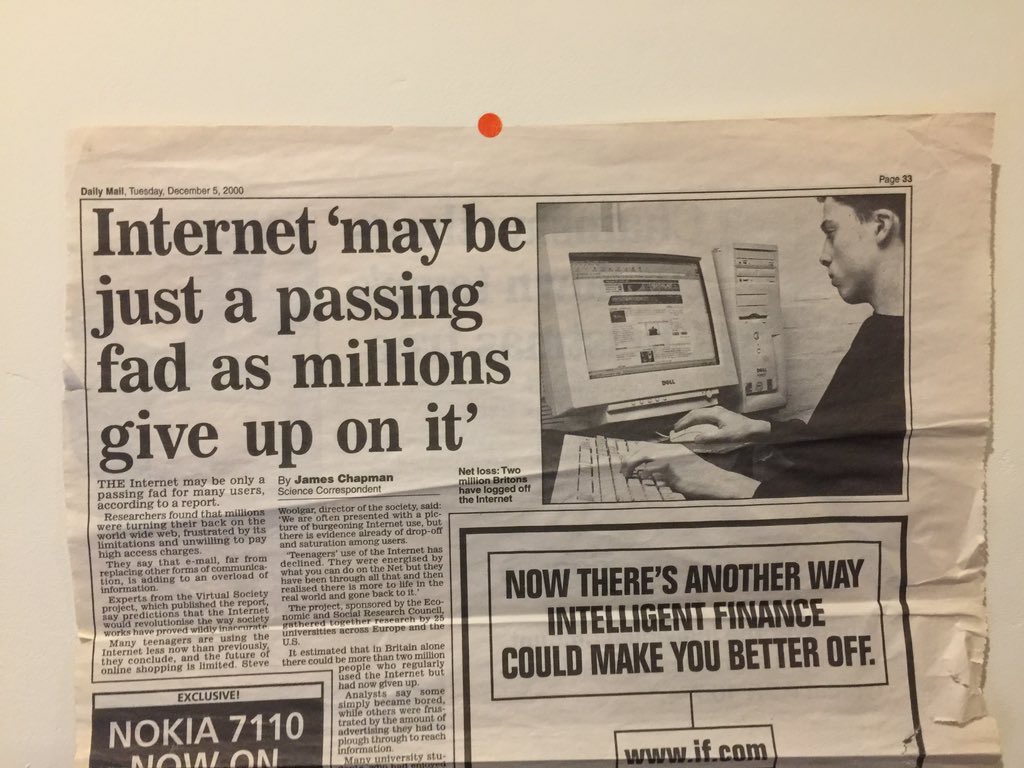 Reslash Because we all need a break from Zoom, check out Relash: quirky, personal, and fun. 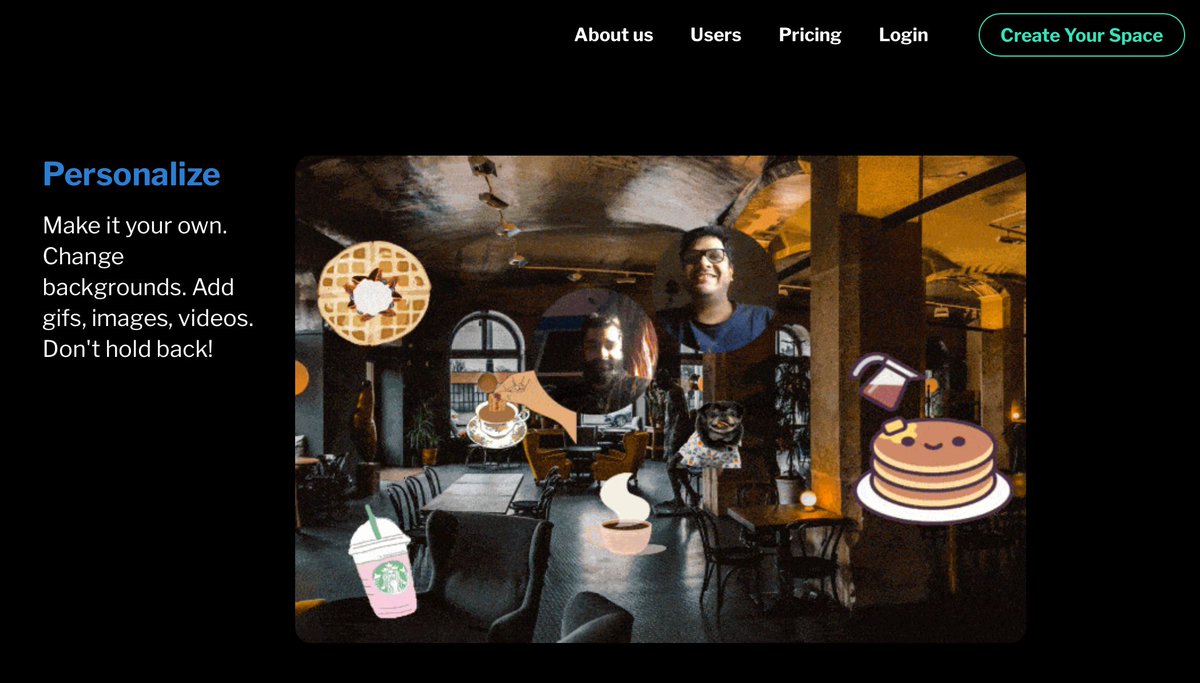 That ceremony was many things, but it was also a reminder that no one needs a one-hour work Zoom call. They fit in J-Lo, Lady Gaga, Garth Brooks plus all the other stuff in 30 minutes. Keep it tight folks. 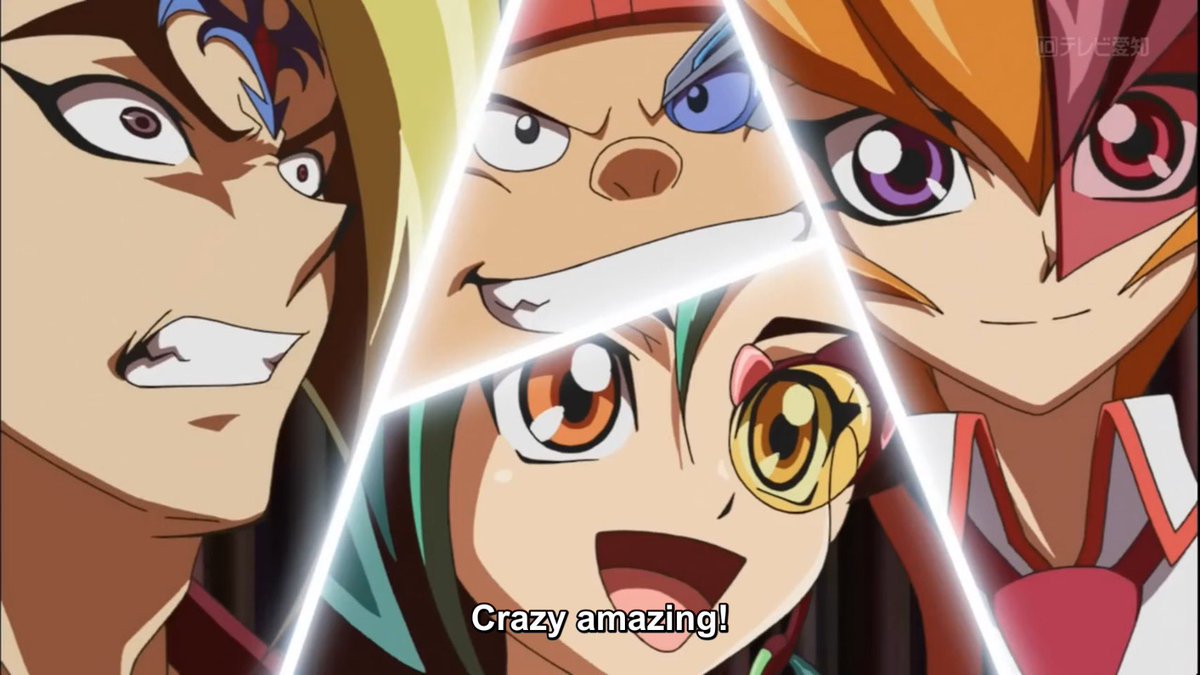 Gregory Koberger “Now this is patience....”

naming-cheatsheet A cheetsheet for naming variable and function names. The styling here is JavaScript, but you can adapt these rules to any other language.

Hemanth.HM “setTimeout(..., 0); clamping to be removed soon.” – so basicaally setTimeout(0) will do what most people think it alwqays did.

Yvonne Lam “Saving the first one for code review.” 👈

Alix E. Harrow: having been told that it's rude to call dinner "gross," our 4yo is finding increasingly creative ways to express himself

"this tastes.......unlucky to me"
"this sends my mouth into outer space. (that's bad)"
"cauliflower is"--[pinches fingers together]--"this much delicious"

HR is not your friend, and other things I think you should know Read the rest, it's good and important to know. I'll only comment on this HR part:

The only time I ever had a conversation with HR even marginally improve something is when I was on the "side" of the company and was reporting something involving personnel to them so they could keep the company out of trouble.

Expert gaslighters, they are. What really makes me wonder is how the people keep doing these jobs. Many of them are in the very classes that get abused by other people regularly. How can you honestly keep doing that job when you are just enabling the abusers?

I think people go into HR with the ideal of helping, and in the beginning it's all fun and office parties. By the time they realize that HR is “The Department for Mitigating Legal Risk”, it's too late. 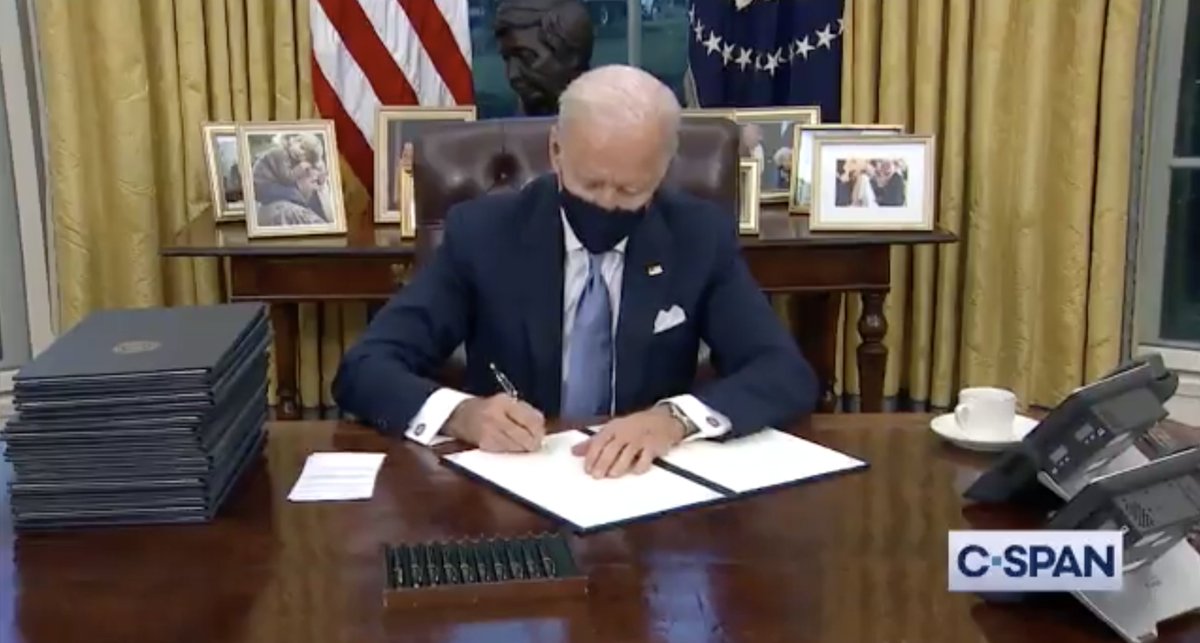 Abhinav Arora So if half the income comes from VCs, does that make Facebook and Google startups?

And just like that, Amazon Web Services forked Elasticsearch, Kibana. Was that part of the plan, Elastic? If you build a successful business, chances are Amazon will try to diaper you. Easier when your product is based on open-source technology that Amazon can use for free. As they've done to Elastic, MongoDB, Redis, and others.

To counter, MongoDB invented the Server Side Public License. Sounds like, but is not an open source license. Elastic also went the SSPL route. And two is a problem, so to keep its free-loading options open, Amazone went nuclear:

Well, AWS has responded by instead detonating an atomic bomb under Elastic, and forking the Apache-licensed code as it stands right now to itself maintain separately.

Vik Pansare “Just legendary... reddit user deepfuckingvalue turned a $785k YOLO into $11M+ as of close today... all from $GME #shortsqueeze” — TL;DR Short-seller Citron decided to bet big that GameStop shares will tank (guess they didn't like the new CEO?) The people of Reddit WSB decided “what if we called the shots, and GameStop shares went up and up, and Citron lost their pants?”

I guess we're going to find out, because on Friday, GameStop shares gained 69% in one day, enough for Nasdaq to pause trading.

A Home Security Tech Hacked Into Cameras To Watch People Undressing And Having Sex, Prosecutors Say A better title for this article "home security techs hack into cameras, but this one was caught":

In court records, one defendant claims Aviles was found to have accessed the home security cameras of her parent's home at least 73 times between 2017 and 2020, including her bedroom while she was still a teenager.

Update on an employee matter Last week, Github fired a Jewish employee who posted “Nazis are about” during the Capitol Hill insurrection. This week, they offered them the job back, and the head of HR resigned. Sometimes companies listen.

Biden Has a Peloton Bike. That Raises Issues at the White House. I’m glad we’re back to worrying about tan suits, and that NYT manaaged to invent a day-0 controversy. Are they afraid the stationary bike will upload its GPS coordinates to the cloud? 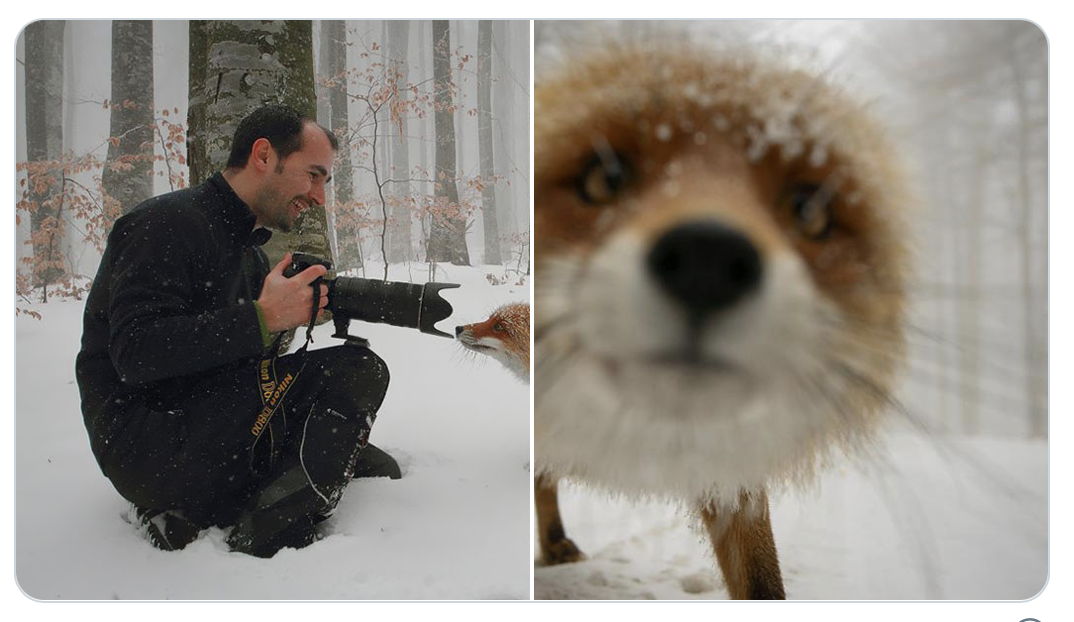 the difference between special interest, hyperfixation and hyperfocus, coming from someone with adhd and autism - a thread

Axios Wants to Help Companies Write Like Its Reporters For the bargain price of $10,000/year, Axios will help your company express itself in plain language, short sentences, and bullet points. Deal of a lifetime.

David Smith It could happen to you or someone you know:

Hey, having been through this for other reasons earlier: if you’re feeling like you’ve been panicking for so long that you should still be panicking but you can’t figure out about what, the next thing that happens after you relax a smidge is you fall apart. So, plan for that. 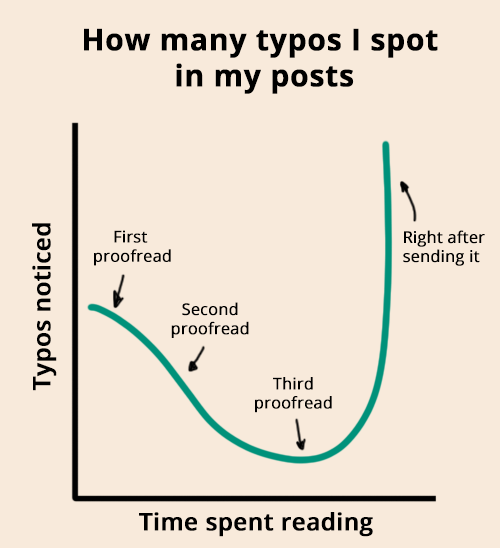 Why cats are crazy for catnip Mosquito repellent?

Most scientists and pet owners assumed the only reason that cats roll around in catnip was for the euphoric experience, Miyazaki says*.* “Our findings suggest instead that rolling is rather a functional behavior.”

Redditors that worked with a dating company (Tinder, Bumble, Hinge, etc.), what’s the most insane user stat or behind-the-scenes fact you found out about? Redditors share their experience with fake profiles, algorithms that don’t match anyone, loose privacy, and more. Also some chance romantic encounters.

Eric Topol “Countries where B.1.1.7 has become dominant, deaths per million people @OurWorldInData”

Now that COVID spread is slowly easing up (at least here in the US), it's the perfect time to keep restrictions in place, keep wearing masks, and keep social distancing! 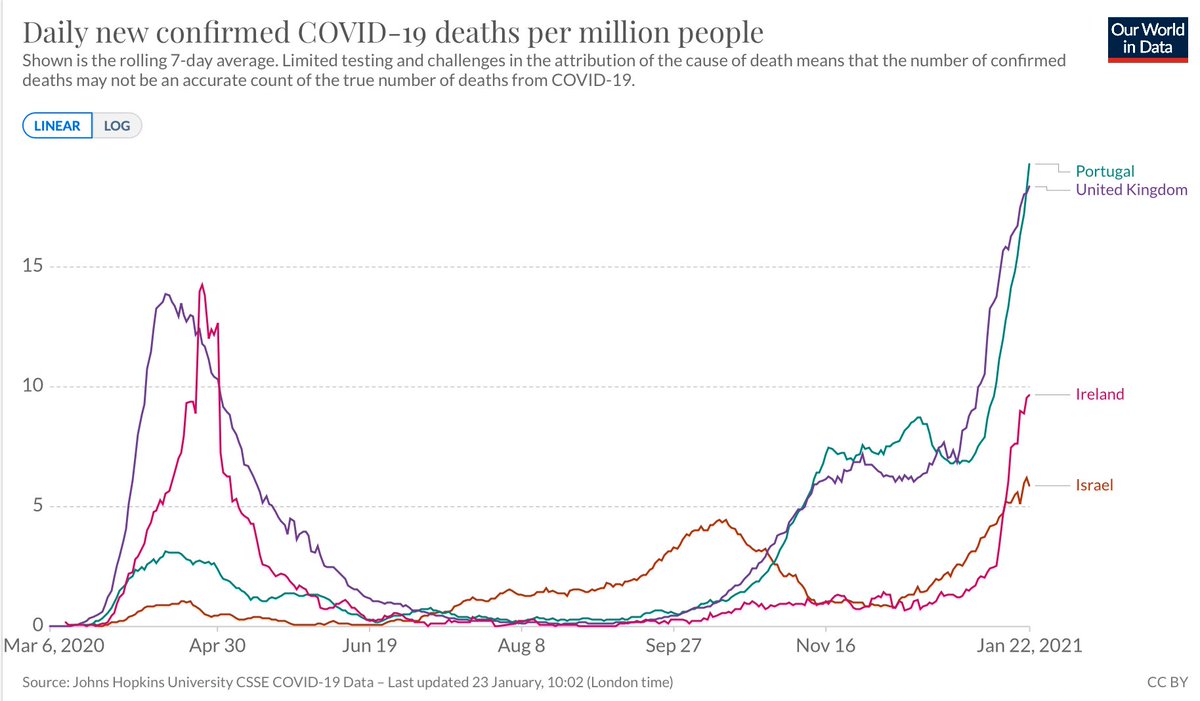 QAnon believers grapple with doubt, spin new theories as Trump era ends So what happens now that the prophechy went bust? Does the Q crowd re-join reality, or will they double down into a new conspiracy?

thetomzone tracks the moment it came crashing down:

YourWullie “Kudos whoever did this 😎” 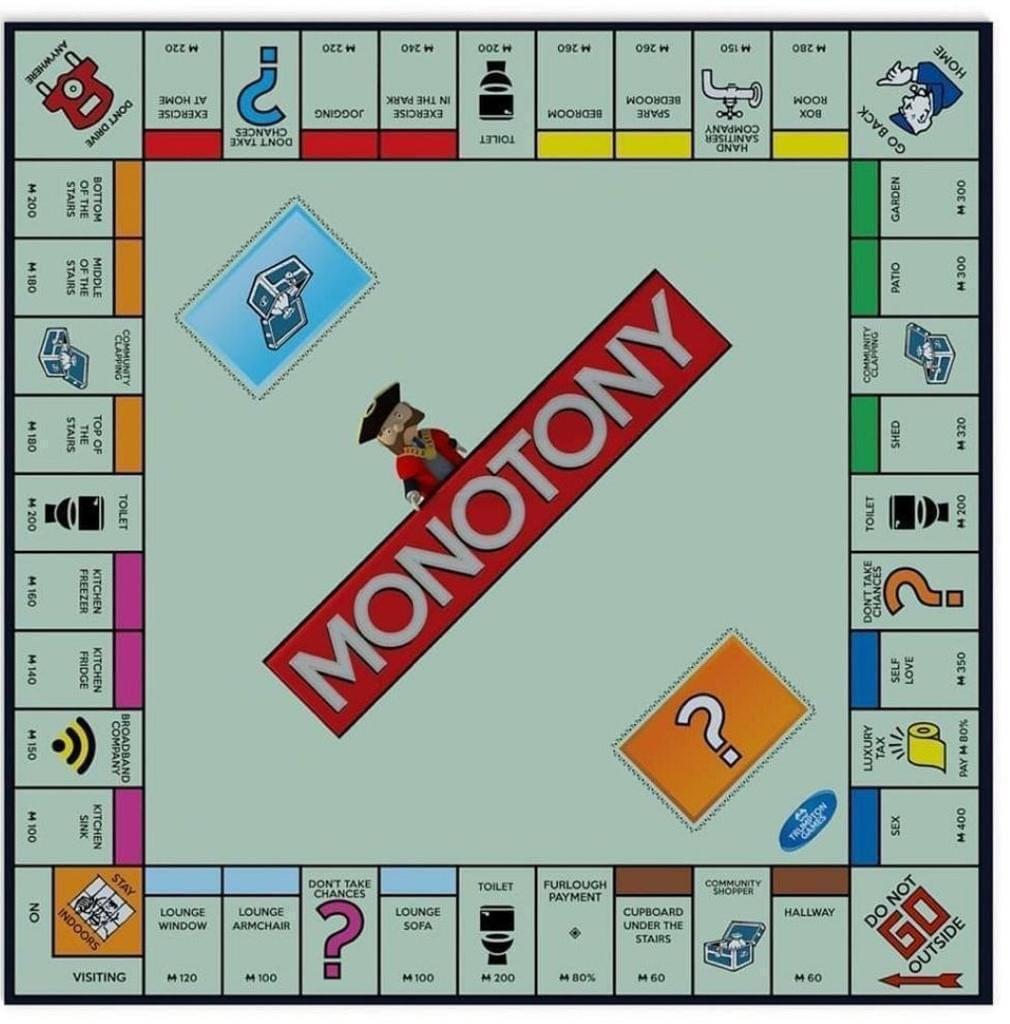 Read the full text of Amanda Gorman’s inaugural poem ‘The Hill We Climb’ I paid partial attention to the inauguration, but then Amanda and her poem:

The new dawn balloons as we free it.

For there is always light, if only we’re brave enough to see it.

If only we’re brave enough to be it.

2020 Game Remember 2020? You can play it all over again: the wildfires, COVID-19, quarantine, the rise of TikTok, the USA elections, etc. 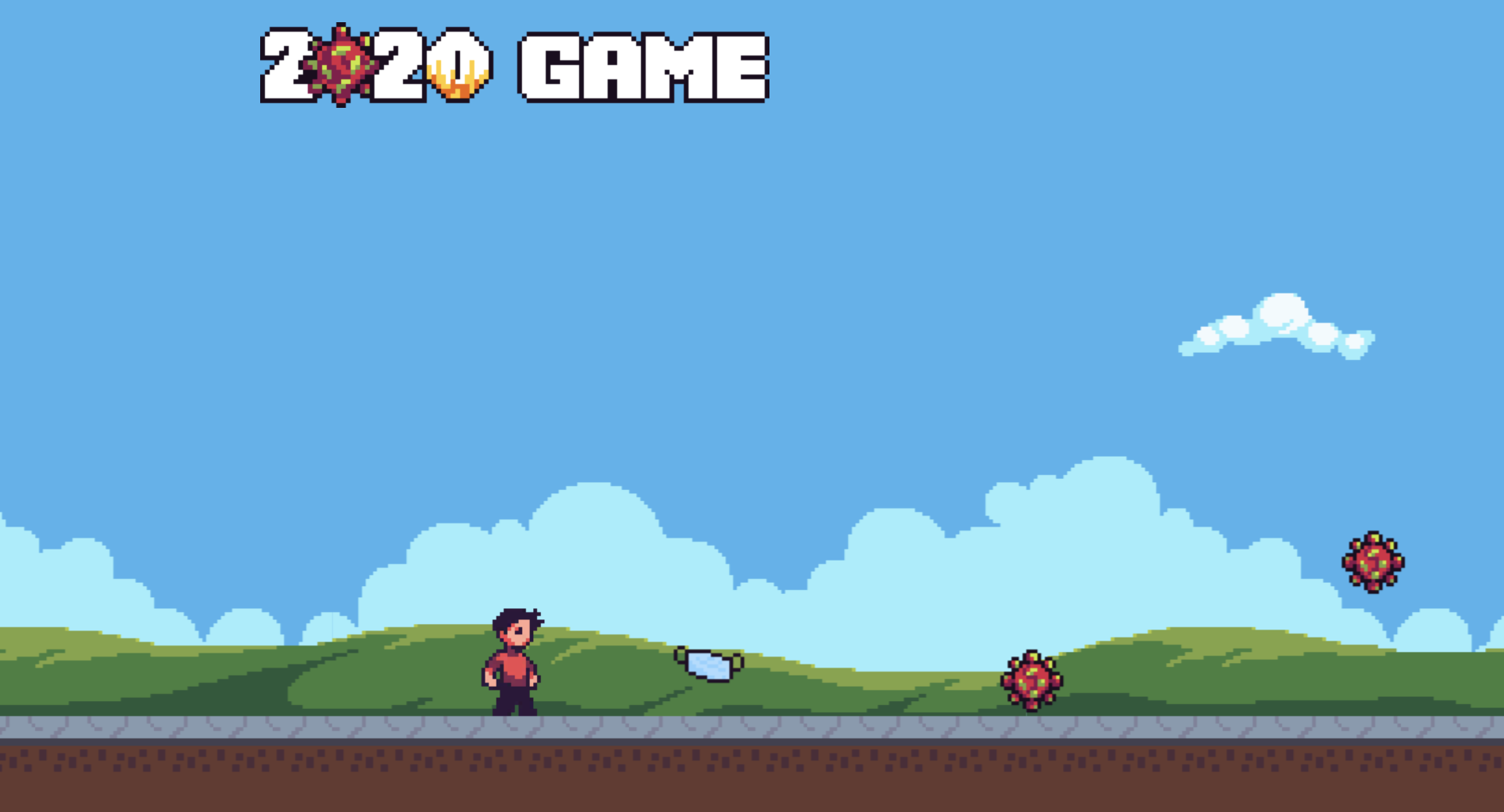