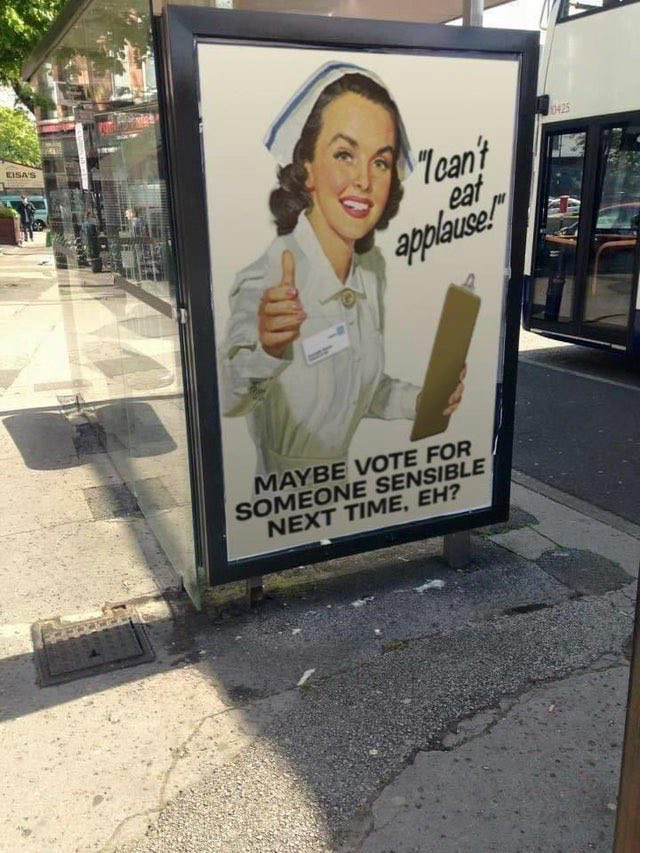 Tim Burgess “Not sure who made this...”

My husband has been working from home for 6 weeks. I've learned that he basically gets paid to be in meetings. Speak in meetings, meet with other people about their last meeting, and have meetings to plan for the next meeting. 😬🥱😧

Why does writing matter in remote work? When you need to explain to your team why meeting culture is broken, and you need more writing, less Zooming:

Sending a message to update a team member or make a request doesn’t need a meeting. If you frame the problem as a Slack post or a document, your teammates can chime in on their own time. This makes it non-disruptive to everyone, while moves the discussion forward.

Ben Casnocha Truth is, office space has and always will be, day care for adults:

BREAKING: People in their 20's with no kids say that working from home is the future

Signaling as a Service On the value of signalling, distribution and amplification. Why it works for tangible goods but doesn't translate as easily to software. And what makes Superhuman the closest thing to luxury software:

One of the best books I have read in the last few years is The Elephant in the Brain by Robin Hanson and Kevin Simler. 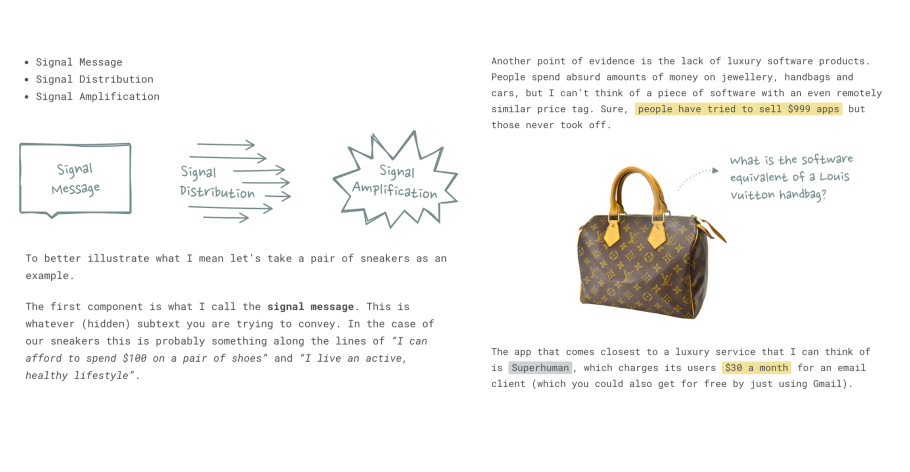 Mark Dalgleish There are two kinds of people, people who make design systems, and people who find this tweet funny:

The trouble with the term “design system” is that it means completely different things to different people. For example, to developers it means “component library” but to designers it means “I'd like a promotion.”

Poster prompts to avoid Design-isms If there was an office wall, I’d hang it there. 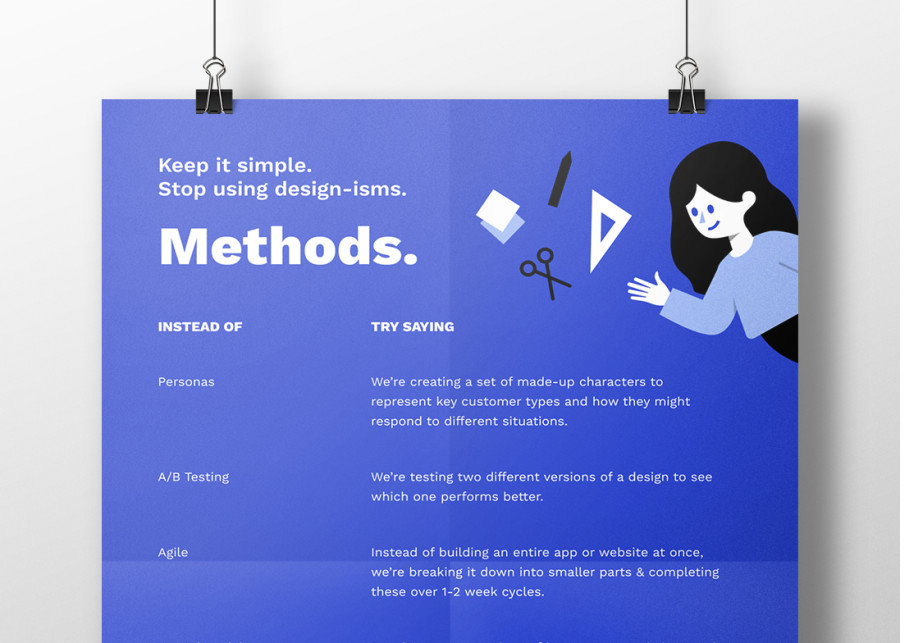 Heydon Yes. UX Rage is real and I feel you:

Does anyone else have this thing where they can't use interfaces, not because they are impossible, but because being angry at how difficult they are to use takes over from actually trying to work them out? "I can't use this, because it should be easy but it isn't"

War Stories: Jordan Mechner on Making Prince of Persia I’m old enough to have played Prince of Persia when it first came out. What an amazing game for that time. This behind the scene video is still relevant today. Game play is something you can’t give up on, and when the challenge is finite RAM and low-res screen, you get creative. Related, Original footage used to animate the first Mortal Kombat video game. 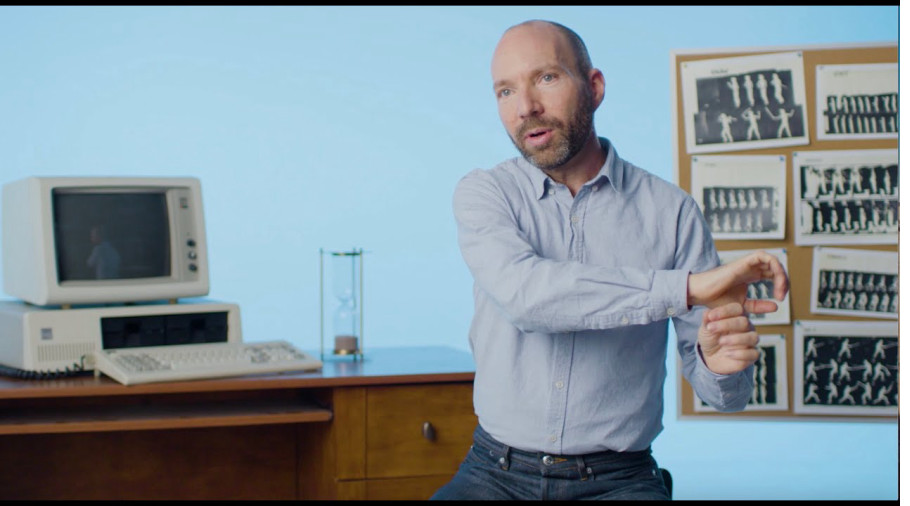 Codespaces Github’s instant development environment in the cloud. All you need is a browser. This is the best thing to happen to my iPad since Apple released the new magic keyboard.

What accomplishments sound like on software engineering resumes If you’re brushing up your resume, start with this post. In practice, your next manager cares most about your accomplishment, and this is one thing developers struggle to articulate. Jacob has some great examples you can follow to make your resume legit:

This advice is fairly common. Most guidance on writing strong resumes will tell you to focus on specific outcomes and achievements. But, I’ve noticed software engineers, in particular, really struggle here. Our work is often complex and hard to measure; we typically work as teams where individual contributes are hard to tease out; and we tend, as a community, to focus on knowledge of tools and technologies over business results.

cyrildiagne/ar-cutpaste This is such a cool use of augmented reality: cut and paste your surroundings!

Man I wish CS programs taught working on software as a team. Source control, code review, writing bugs, testing... all of it.

Julien Dubois “Tabs vs spaces? Let me tell you about Fibonacci indentation ! Great way to reduce the number of nested loops 😄” 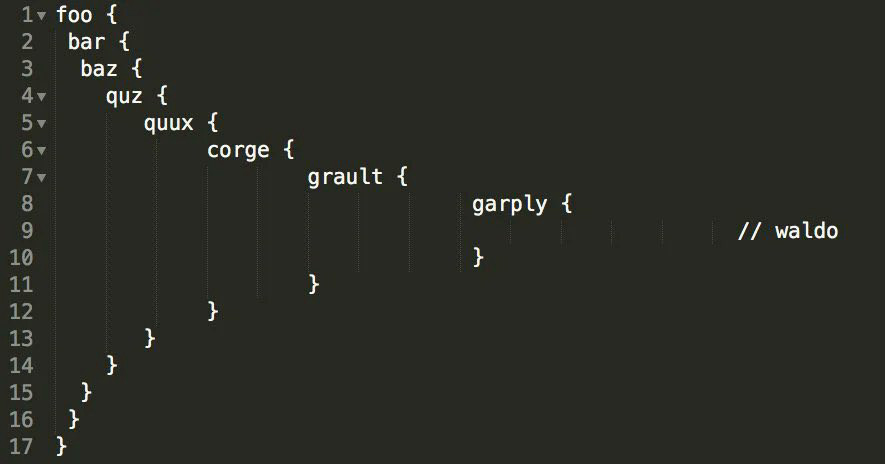 Never attribute to stupidity that which is adequately explained by opportunity cost Other people have their own priorities:

I've found that neither malice nor stupidity is the most common reason when you don't understand why something is in a certain way. Instead, the root cause is probably just that they didn't have time yet. This happens all the time at startups (maybe a bit less at big companies, for reasons I'll get back to). 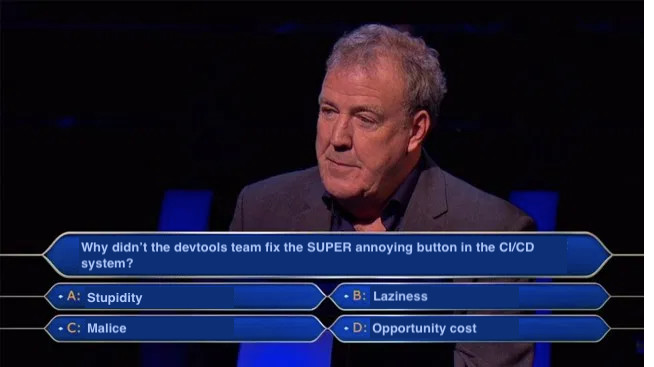 I was once invited to speak at McKinsey. I started by asking, “how many of you have ever started or run your own business?” No one put their hands up. I then announced the name of my presention, “Anything is easy when you don’t have to do it”.

I’ve not been invited back.

Deal Performance in April Yields Cautious Optimism for May HubSpot breaks down aggregate data from 70,000 businesses, looking at deals closed, email open rates, and web traffic. Overall, bad with a positive outlook. Striking difference between industries most most and least impacted — travel is down a lot, construction not so much:

Last week was end-of-month for sales teams, and we saw deals closed increase by 4%. With that boost, our customers closed more deals the last week of April than they had since the week of March 16 when the economy really began to deteriorate. This was a hopeful sign of recovery that indicated we might be trending in a positive direction.

On the other hand, rep optimism for May isn't increasing after last week's metrics. Deals created experienced a slight decline, staying essentially flat. 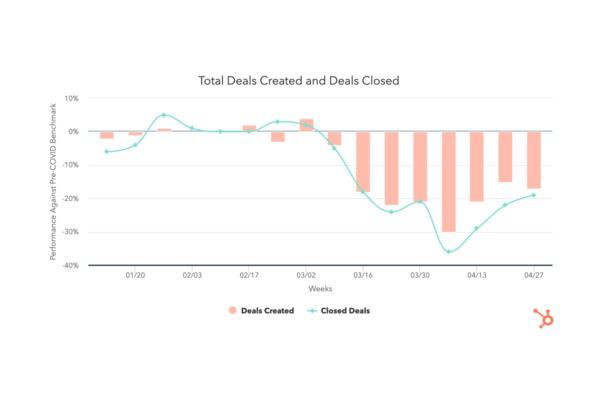 actioncookbook Hot take. Most people buy into the narrative that big corporations can’t innovate, but the reality is often they’re financially engineered to fail:

Every article about a major retailer going bankrupt spends eight paragraphs musing “I guess millennials just don’t buy shirts?” before casually mentioning a private equity acquisition three years ago in one sentence at the end

Related, Why Private Equity Firms Like Bain Really Are the Worst of Capitalism has a good explainer for what typically happens when private equity gets involved:

• Of the twenty-five companies that private equity firms bought in the 1980s that borrowed more than $1 billion in junk bonds, more than half went bankrupt.

The inconvenient challenge of online returns Online retailers don’t have fitting rooms, so customers order two of each, and send one back. What most people don’t realize is, the return doesn’t go back to the retailer, to be put back on the rack. It goes back to some return center that will dispose of it. This is both expensive for retailers, and a source of pollution that’s entirely invisible to consumers. Related, why Casper is the best thing to happen to 1-800-GOT-JUNK.

The PE Hustle. If you’re a startup and was just contacted by private equity, offering you the deal of a life time, you want to read this thread first. It will spare you an emotion roller coaster of despair.

psychicpaper Under the hoods, iOS is a mess of duplicate code and bad take XML. This is a classic example where you want to follow the DRY principle, and Apple does the opposite. Anyway, author discovered this 3 years ago and got to benefit until Apple found out and put a fix in the latest beta release. Thanks for the technical teardown and lesson in code reuse and security.

levelsio How to catch IP thief in the act (h/t Damien Joyce):

Years ago, I added a 🇯🇵 Japanese city called Dorobō to Nomad List

Dorobō never existed in real life, but I used it as a bait to see who would copy my data 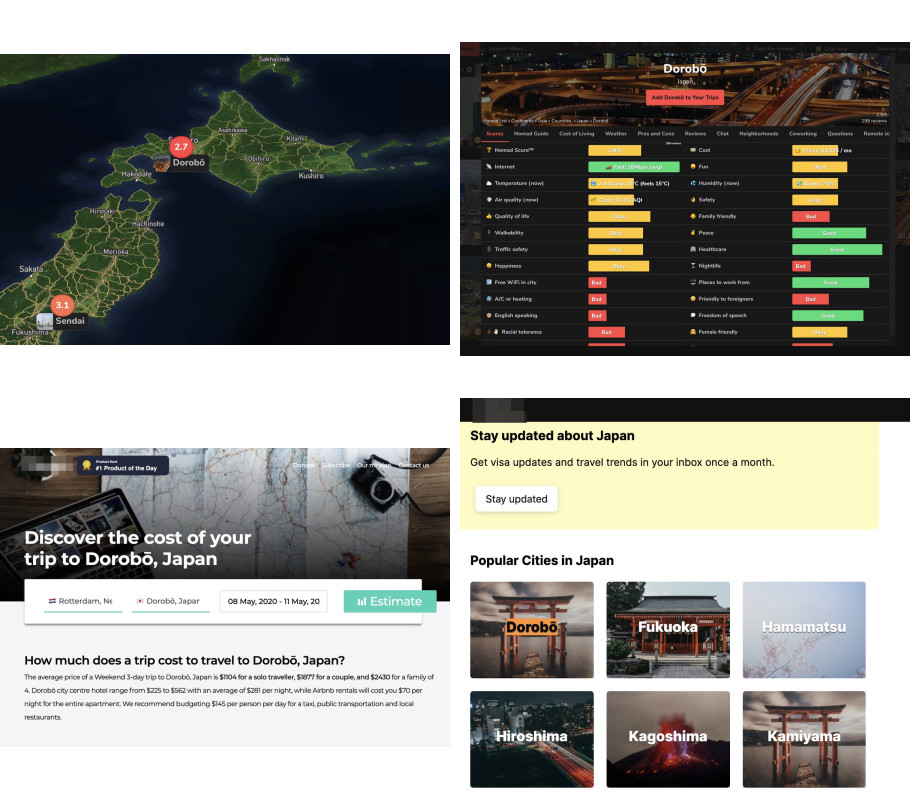 Welcome to the pleasure dome “Telling your suitcase there is no holiday this year can be tough...emotional baggage is the worst” 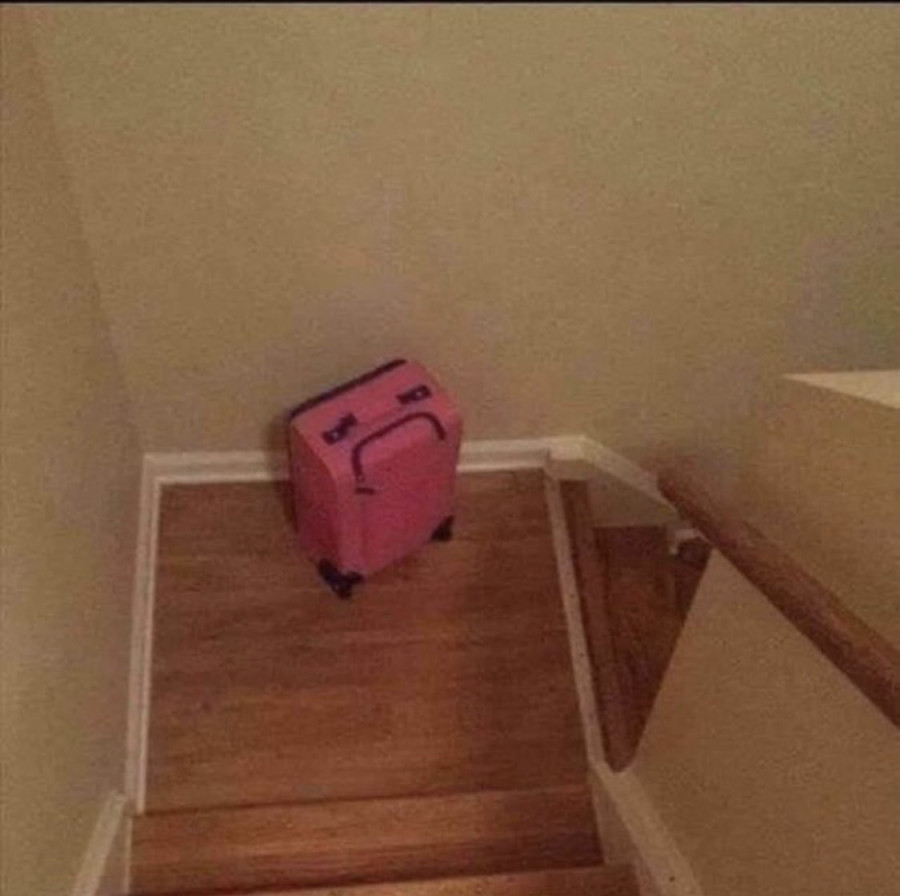 My wife just pulled me into the other room and I thought she wanted to have a serious talk but she just wanted to give me m&m’s without the kids seeing.

One of my favorite apps is pocket because whenever I see something pretty interesting I save the link to pocket and then I never open pocket.

Saves me huge amounts of time.

One in five Wendy’s is out of beef, analyst says So now you know which fast food chain is serving you fresh meat:

Wendy's is "more exposed" to the shortage sparked by the coronavirus pandemic because of its reliance on fresh beef compared with its competitors, the note said.

Tech bros are forever hung up on their exes. Ex-Facebook, Ex-Amazon, Ex-Google.

Massimo “Remarkable capture of a a nuclear reactor refueling process performed with a high radiation tolerant camera. The blue glow you notice, is due to the Cherenkov radiation”

Venezuela Said It Captured Two Americans During A Failed Coup And The Backstory Is Incredibly Wild At this point, people are just auditioning to be the next Tiger King. This story has “a daring amphibious raid”, CIA impersonators, and 250 tons of cocaine:

When the AP asked why his team risked the Sunday raid on a heavily armed port city, he reportedly said he was following the example of Alexander the Great and striking “deep into the heart of the enemy.”

Models show that if 80 percent of people wear masks that are 60 percent effective, easily achievable with cloth, we can get to an effective R0 of less than one. That’s enough to halt the spread of the disease. Many countries already have more than 80 percent of their population wearing masks in public, including Hong Kong, where most stores deny entry to unmasked customers, and the more than 30 countries that legally require masks in public spaces, such as Israel, Singapore, and the Czech Republic. Mask use in combination with physical distancing is even more powerful. 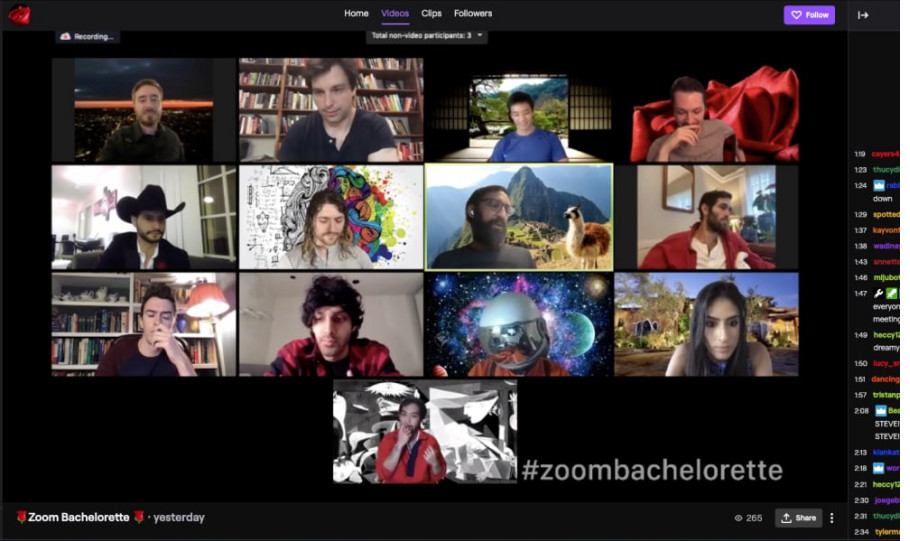 ❤️ If you enjoy Weekend Reading, share it with your friends. It takes many hours to put this together and a personal recommendation from you will go a long way