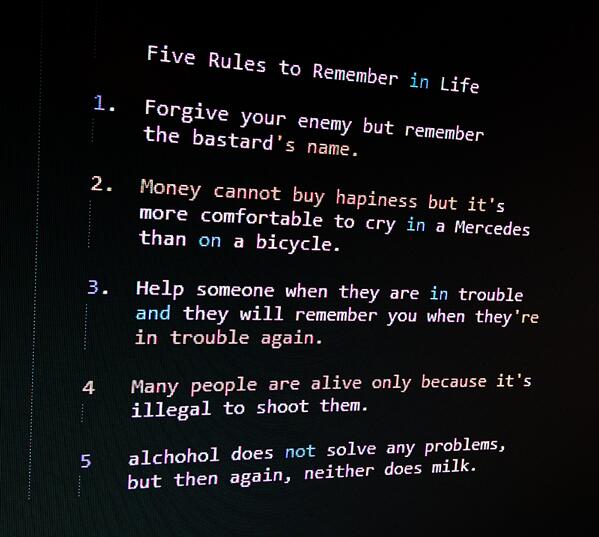 Grids From Typography Pick up a suitable text size, decide on the body measure, determine the appropriate leading and base units, and a grid will follow. Let your content shape the grid, because "in the end, it’s all about the content, and about removing barriers to maximize impact."

Finding Simplicity in a Multi-Device World. Did you know over 40% of adults start an activity on one device and finish on another, usually moving to larger screens, with 58% ending up on a laptop. Activities most likely to happen across devices are FB and email, and not surprisingly mobile are the only devices used continuously throughout the day (at home, work and when commuting).

Taking A Second Look At Free Fonts revisits Source Sans Pro, Anonymous Pro, Lato and other dependable fonts you can use for free.

http://ismyshiftkeyonornot.com/ since I can no longer tell if the iPhone's shiFt key is on or off.

Cerberus is a small set of email patterns that you can use to build responsive emails that work on Outlook, Android and mobile GMail. Looks like a worthy successor to Responsive-Email-XX.

img.ly offers a photo editing SDK for web and mobile: image filters, crop and rotate, auto-enhance, and more. Free for non-commercial use,

ExpressJS 4.0: New Features and Upgrading from 3.0. So glad they fixed the issues with mixed use of .get() and .use(), bummed that I'll need to manage 10 dependencies moving forward.

Fun Fact: you can legally detain any indie developer in a windowless room for a period of up to 48 hours by telling them it's a game jam.

You know what’s cooler than spending $99 on a license of Vim? Abstinence.

Lesser-Known JavaScript Debugging Techniques talks about stuff you can do in the browser console, including new-to-me debug and monitor, and how to trap native methods.

A criticism of the Single Var Pattern in JavaScript, and a simple alternative. I've been burned by the "keystroke saving" single var technique enough times to nod in agreement. TL;DR one variable per var and hoist them yourself.

“Duplication is far cheaper than the wrong abstraction.” @sandimetz @rbonales

protip: if your linear business logic is too easy to understand, decouple it with an event system — voilà now what the fuck is going on

It’s not about eliminating all state. It’s about minimising unnecessary state, and being fully aware of how+when we deal with the rest.

My kids were confused about Mexican food. I explained burritos are like monads and now they eat freely.

Agile Is Dead (Long Live Agility) Dave Thomas suggests rebranding Agile to distinguish it from the heavily planned and documented tools and processes that are commonly deployed by irony-oblivious management.

A Relevant Tale: How Google Killed Inktomi TL;DR when engineers switch to using a competing product and IT blocks access to it, that's when you pack it up move on.

The Science of ‘Paying It Forward’

Duck Duck Go's 2014 FOSS Donations There's a company that takes your privacy and security seriously, and donates back to the open source community to sustain these technologies.

How Target detected hack but failed to act It's easy to laugh at a single-file PHP app with no version control, but practical security is hard even when you've got $1.6 million to spare on a dedicated malware detection system.

Top Overlooked Security Threats to Node.js Web Applications In particular bothers me how Express.js automagically creats array parameters. It's fabulous for prototyping and shit when it comes to building secure apps.

Privacy at peril: From one tweet, a full-blown hack A journalist attempts to hack into someone else's bank account, and all they have to go with is face and first name.

2048 DO NOT click this link, unless you want to get sucked into playing a decietfully simple and quite addictive game. PS my best is 2320

Squirt is the latest (and so far best) speed-reading bookmarklet based on the Spritz demos.

Save more with Google Drive That's 1TB for only $10/month. Damn. Just keep in mind that while Google offers encryption to thwart MITM, they can read the files you upload.

Want to understand your implicit biases? When you hear something third hand, to whom do you give the benefit of the doubt?

The Five-Second Rule Is Now Supported by Actual Scientific Evidence. There you go. You're now helping science with emperical evidence each and every time you test out the 5 second rule.

Why did the stock market sell off today?. So true:

CNBC: It didn’t sell off at all, it was actually a reverse rally

Forbes: Taxes are too high