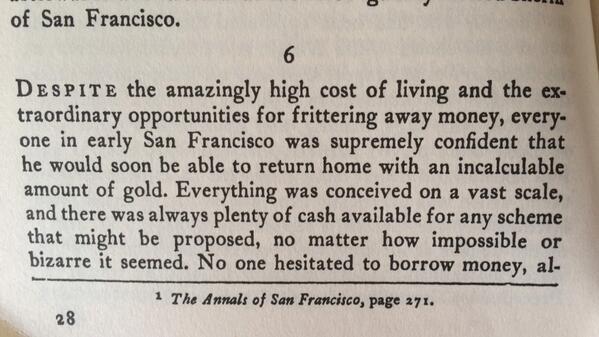 Day 18, part 3: I quit Blind person's experience of Android. Usability issues I didn't know about, like:

And this was when I realized that TalkBack does not have a screen curtain. On iOS, I have this enabled always. If prying eyes want to look on my screen, all they see is blackness. On Android, everything lays plainly before them.

Share Buttons: What You Must Know Before Implementing Mostly that they make little to no difference.

Realizing that web sign in forms are like the toilets of the web: not life enhancing but somehow necessary everywhere you go.

What is Product Design?

fork() can fail: this is important

Guess what happens when you don't test for failure? Yep, that's right, you probably treat "-1" (fork's error result) as a pid.

Wavepot For lovers of code and music: a live JavaScript editor, write a dsp(t) function to generate sound waves.

DOM: attributes sadness How the DOM got the attribute API so wrong.

Upcoming Breaking API Changes in Node v0.12 Mostly around VM which is getting a major facelift.

Neptune.io Like an IFTTT for your server: "If this ALERT occurs, then do this ACTION".

Is User Testing Unethical? User testing doesn't have the ethical standards as clinical studies, but also doesn't share a history of horrible treatments and experiments.

Putting the science in computer science So which language is the best? Does static typing make a difference? Are design patterns helpful?

They found the opposite of Linus' law is true. The more people work on a piece of code, the more error-prone it is!

When writing a pull request description on GitHub, give a little more context than you think you need to. 6-months-later you will thank you.

HTTP Shaming Sites and services that use HTTP where they should be using HTTPS.

SB-962 Smartphones This is the California "kill switch" bill, which basically requires all phones to include an opt-in feature that disables re-activating without owner's permission.

It's a standard feature on iPhones and many other smartphones, the bill's only purpose is theft deterrance. A lot of people seem confused by the name, assuming it's something entirely different. The bill is short enough, go read for yourself.

Hackers steal records on 4.5 million patients from healthcare system Don't worry, your medical records are in the worst possible hands:

Recent ratings released by security-rating firm BitSight found that the healthcare industry had more security issues and signs of breaches than any other industry, including the retail sector.

The lack of such a database is intentional. No government—not the federal government, and not the thousands of municipalities that give their police forces license to use deadly force—wants you to know how many people it kills and why.

The Talk:
How black parents prepare their young sons for life in America

Schrodinger's douchebag: A guy who says offensive things & decides whether he was joking based upon the reaction of people around him

AB-2293 Transportation network companies: insurance coverage This is the bill Uber is fighting. It's goal: to make sure you, the passenger, covered by adequate insurance. Go read and judge.

China plans to fight terror with ‘dozens’ of new cities According to this article, they're going to fight terrorism with better education and more jobs. What a concept.

Policing by consent On running a police force based on The Nine Principles of Policing.

The Internet's Original Sin The complicated relationship between Internet and ads.