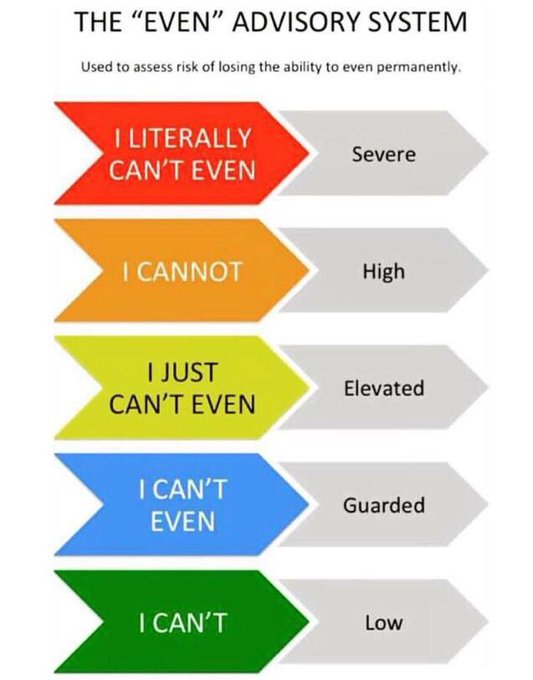 @flowerwheel76 The "Even" Advisory System

This week we're amazed by the UI of dental software; we experience semver in the wild; we trademark Many Small Modules Pain(tm); Bob Ross and the Joy of Game Development; why China can't catch up with US security practices; Mallory shows us how to present by reading the slides out loud; Homejoy has a lesson on the excess of growth-driven startups; last, we watch the wind blow whichever way.

@LiToast This is important in life, and has specific implications in product design:

Dentrix G6 Yes. This is the menu screen. Yes. All these objects are clickable. Except not the seats in the waiting room. But everything else, you click to go to a different page. @manp Your periodic reminder that what you call "REST" may be just "HTTP":

3.0.1 update This is how semver works in the real world (not picking on any package in particular):

Note that the 3.0.1 update is strictly speaking backward-incompatible with 3.0.0. ... However, this would only affect users who updated to 3.0.0 during the short time that it wasn't deprecated ... This seems unlikely, and therefore the major version was not changed.

"You can always edit a bad page. You can’t edit a blank page."

@rauschma No really. I feel the Many Small Modules Pain(tm) daily.

npm installs a lot of small files. Quite taxing for the file system (e.g. copying to a USB-3 stick, let alone Dropbox).

node.js v4 gets an A+ for SSL Labs with no configuration
Boom!

So here's how to configure node.js v4 to pass SSL Labs with an A+: you don't.

@trek Word to the wise:

Usually when I watch people who “don’t TDD” program, they’re TDDing in a browser/REPL/etc.

Then throwing those tests away.

The Evolution of a Software Engineer Re-post because it's so damn good.

Oh I get it, your costume is "Hungover On-call"

China Unable To Recruit Hackers Fast Enough To Keep Up With Vulnerabilities In U.S. Security Systems The Onion is probably right on that one:

The gaps in the State Department security systems alone take up almost half my workforce.” At press time, Liu confirmed that an inadequate labor pool had forced China to outsource some of its hacker work to Russia.

C is a programming language for turning low-level byte arrays into security advisories.

Mallory Ortberg, The Toast - XOXO Festival (2015) Mallory gives her first public talk. She's just reading her slides out loud. And it's fantastic and you should watch all 24 minutes:

Interview Humiliation This is pretty much everything you need to know on how to not interview people.

Coding bootcamp grads boost their salaries by 40% on average For many people, coding bootcamps are a chance at a second career:

there are encouraging signs these so-called bootcamps are helping diversify the industry by encouraging people in their early- to mid-careers (on average, participants were 31 years old) to become programmers.

Homejoy at the Unicorn Glue Factory A cautionary tale all founders should read:

“We were bleeding cash across the globe,” said Zeitsman. “All to focus on the growth we thought we needed to justify our valuation.”

Imagine if last names were invented now, so instead of “Smith” and “Baker,” we had “Frontenddeveloper” and “Socialmediaconsultant.”

Turning the iPhone 6s Into a Digital Scale Cool idea. Sadly, Apple won't allow the scale app on their store.

There is only one good name for a conference room: "oh look, that one is open!"

wind map Captivating. Live wind map of the US.